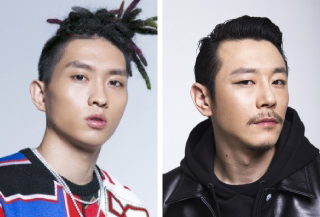 Rapper C Jamm, left, was arrested for marijuana use while rapper Bill Stax, right, has been booked without detention for the same charge.

According to the Narcotics Unit at the Gyeonggi Nambu Provincial Police Agency, a total of two people were arrested for marijuana use and six others were booked without detention on Tuesday.

C Jamm was charged for smoking marijuana a number of times since May 2015 and he was arrested in his home in Yeonhui-dong, western Seoul. Bill Stax was found to have smoked marijuana three times in the same period.

Each of the eight people charged work in the music industry. Some are producers, while others are rappers in training.

C Jamm, whose case was sent to the prosecutors’ office last week, is currently being investigated at the Suwon Detention Center. A source from the center said, “We are currently [hoping] to find the suppliers.” Meanwhile, Bill Stax has admitted to marijuana use and was booked without detention.

C Jamm and Bill Stax are both represented by the same label, Linchpin Music, and have appeared on separate seasons of cable channel Mnet’s popular rap competition program “Show Me the Money.”