[Sponsored Report] Songdo’s waterfront is about to get a makeover

[Sponsored Report] Songdo’s waterfront is about to get a makeover 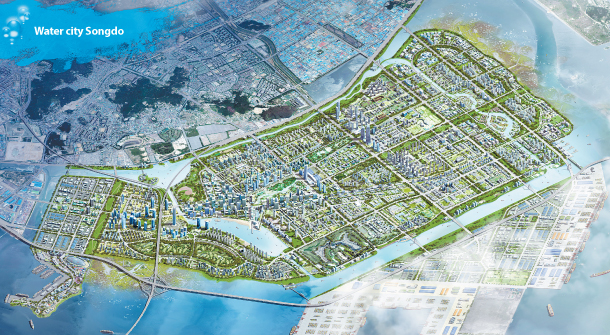 Incheon Free Economic Zone Authority (IFEZ) Songdo International City will be reborn as a global city with a great waterfront space where humans and nature can coexist.

The “Songdo Waterfront Project,” included in a recent review of the Scenic Conservation Act, will begin construction in October this year.

The review is to ensure that the shape, material, function and lighting of the new facilities are designed to work well together.

The waterfront project began in 2012, but construction ground to a halt after two feasibility tests, five investment tests and two inspections highlighted flaws with the plan. After all the issues were resolved, construction is finally set to begin six years after the project originally began. Songdo can finally look forward to being a global city where nature and culture can coexist fluently.

The project not only fosters Songdo as an ecological marine site but also stimulates the local economy. It also aims to prevent flood damage in heavy rain and establish a sluice system to manage water levels around Songdo.

To ensure the smooth progress of the project, IFEZ formed an operating team to take the lead on various elements of construction including planning, design, procurement and designating military facilities.

“We will do our best to complete the implementation plan, local financial investment review and procurement requests so that construction may begin in October,” said an official at IFEZ.

Four bridges will be built, two for pedestrians and two for vehicles. The bridges in the south are themed after the “Song for Sailing,” Songdo’s sailing song that includes the lyrics; “Set anchor with the moon and the sun, sail through the wild waves and run toward the future.”

“Sunrise Bridge” will be located in the east of Songdo and will be arched to imply the rising sun. A resting place with a terrace and benches will be in the middle of bridge for visitors to enjoy the view.

“Anchor Bridge” will be decorated with the motif of an anchor, symbolizing how Songdo is at the beginning of its voyage. It is the biggest bridge of the four and is part of the tram route, satisfying regulations for both roads and railroads.

“Wave Bridge” is designed with a wild wave motif, representing Songdo relentlessly moving forward despite obstacles and hardships. Unlike the other bridges, which use subtle colors, Wave Bridge will be brightly colored and will include vibrant night lights.

“Moonlight Bridge” is located in the very west of Songdo and is adjacent to the sea. Its design takes inspiration from the moon and represents Songdo’s peaceful night sky and desire to move forward. In the middle of the bridge, a big moon will be lit up at night, able to change from a crescent to full moon.

The rails on the bridge will be made out of glass and decorated with the stories of each bridge so that visitors can fully understand the design and enjoy the Songdo waterfront even more. Lighting on the underside of the bridges will add to the view at night.

Waterworks around Songdo will be designed to protect the city from heavy rainfall. The reservoirs around the city, which are great places for citizens to relax on warm days, will also be used during the rainy season to save lives and protect properties from coastal water in Incheon’s tidal basin. Each reservoir has the capacity to take on an addition 2.5 meters (8.2 feet) of water.

Sluices will control the flow of water, allowing sea water to flow in and out of the water system on normal days, but blocking the flow during periods of high rainfall to prevent flooding.

Through a numerical model experiment, the Korea Meteorological Administration (KMA) is working on a measure to predict the zones and the quantity of flooding that could take place.

“When Songdo Waterfront is constructed, artificial beaches, trails, industrial facilities and marinas will be established for Songdo to be a global city. We will do our best to carry out the project speedily and fluently,” said Kim Jin-yong, commissioner of IFEZ.