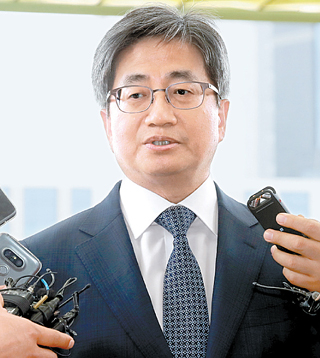 Supreme Court Chief Justice Kim Meong-su talks to reporters on his way to work in the Supreme Court in Seocho District, southern Seoul, on Tuesday. [YONHAP]

Supreme Court Chief Justice Kim Meong-su on Tuesday left open the possibility of investigating his predecessor Yang Sung-tae, amid allegations that Yang tried to curry favor with the former Park Geun-hye government to get support for his agenda to make major changes to the court.

Yang is also suspected of ordering the administration of the judicial system to classify judges according to their political and ideological leanings and monitor activities of judges who were not supportive of his leadership.

In Korea, the Supreme Court is in charge of most of the judicial system and the chief justice has vast powers.

“We are not working toward a single objective here. That being said, all options are on the table,” said the top justice Tuesday. Kim said he would make his decision once he finishes reviewing a report filed by a special investigative team into the Supreme Court’s alleged abuse of power and breach of judicial independence and political neutrality.

Suspicions that one of the three pillars of Korea’s democracy violated its own political neutrality and independence from the administration have been snowballing since the special probe team announced the results of a year-long investigation Saturday into the practices of the National Court Administration (NCA), which is under the Supreme Court, when Yang served as the top justice from 2011 to 2017.

One of the top priorities for Yang during his tenure, which spanned the Lee Myung-bak and Park administrations, was to set up a “final appellate court” within the Supreme Court, which never came to fruition.

That court would have handled less important cases, leaving the Supreme Court to handle the most significant ones.

The probe discovered many documents written by the NCA during Yang’s reign that raise concerns about violations of democratic principle that guarantees the judiciary’s independence.

Some documents contain predictions of likely reactions from the Park Blue House if a court ruled in favor or against the government’s interest. For example, one document described how former President Park and her aides could react to a ruling on Won Sei-hoon, former director of the intelligence agency who stood trial for masterminding a cybercampaign in favor of Park. A report on the Park Blue House’s potential reaction and anticipated benefits from a verdict that suited the government on a progressive teachers’ union, which Park sought to outlaw, was also drawn up by the NCA.

It was also discovered that a vice director of the court administration ordered subordinates to look into the personal assets of a judge who was opposed to the establishment of the final appellate court. The NCA was also found to have monitored judges’ activities in a potential breach of judges’ independence.

The probe, however, decided not to bring legal action, because there was no evidence that any of the judges targeted actually suffered disadvantages.

Prosecutors are also poised to launch an unprecedented probe into the alleged abuse of power in the judiciary.

Former Chief Justice Yang refused face-to-face questioning by the special investigative team and is silent on the growing controversy.