North Korea’s former spy chief flying to the U.S. to prepare for summit

North Korea’s former spy chief flying to the U.S. to prepare for summit 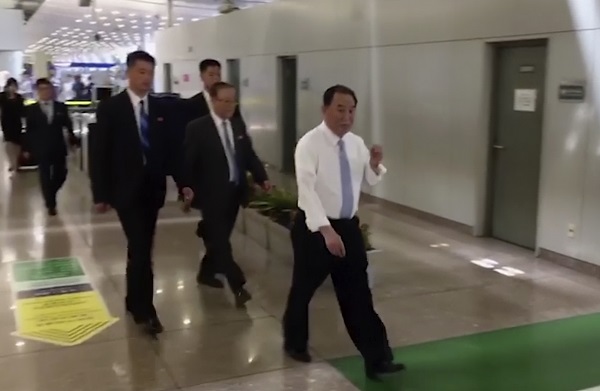 In this screen capture from a video, Kim Yong-chol, in white, director of the North’s United Front Department, which is responsible for inter-Korean relations, arrives at Beijing Capital International Airport in Beijing Tuesday. [AP/YONHAP]

Kim Yong-chol, director of North Korea’s United Front Department, which is responsible for inter-Korean relations, was spotted in Beijing Tuesday, en route to New York where he could hold talks with U.S. officials to fine-tune details for a possible summit next month.

The influential Kim, a vice chairman of the North's ruling Workers' Party Central Committee, flew into Beijing Capital International Airport Tuesday morning on the North Korean flag carrier Air Koryo. He was confirmed to have made reservations to fly to New York from Beijing Wednesday.

The visit comes just two weeks before a possible June 12 summit between North Korean leader Kim Jong-un and U.S. President Donald Trump, which was abruptly called off last Thursday but appears to be back on track.

Kim’s visit to the United States comes as U.S. and North Korean officials are holding pre-summit meetings both at the truce village of Panmunjom, on the northern side of the inter-Korean demilitarized zone, and in Singapore. The Panmunjom meeting involves diplomats, while the Singapore meeting involves staff dealing with logistics, protocol and security.

Kim formerly ran the People’s Army’s Reconnaissance General Bureau, the regime’s main spy agency, and has been at the forefront of many talks, including leading a high-level delegation to South Korea for the PyeongChang Winter Olympics in February and, most recently, accompanying the North Korean leader in his second summit with South Korean President Moon Jae-in last Saturday.

It is expected that the former spy chief will meet U.S. Secretary of State Mike Pompeo, who previously served as director of the Central Intelligence Agency. The two met earlier in May, during Pompeo’s second visit to Pyongyang in a month. Kim and Pompeo are likely to discuss the agenda for a North-U.S. summit, if it takes place as planned on June 12 in Singapore, and negotiate other details.

Since Kim is spending a day in Beijing before flying to New York, it is likely that he will also have reached some consensus with China before entering talks with U.S. officials. Kim was greeted in Beijing by the North Korean ambassador to China and did not respond to reporters’ questions as he left the airport, departing in an embassy vehicle.

There is speculation that Kim, during his U.S. visit, may meet with Trump.