The influential Kim, director of North Korea’s United Front Department, which is responsible for inter-Korean relations, landed in Beijing Tuesday morning en route to New York. His visit comes amid a rapid succession of meetings between U.S. and North Korean officials in Singapore and at the truce village of Panmunjom at the demilitarized zone to prepare for a summit between their leaders. The visit comes just two weeks before a possible June 12 summit between Kim and Trump, which was abruptly called off last week through a letter, but appears to be back on track.

In the letter Thursday to Chairman Kim, Trump stated: “If you change your mind having to do with this most important summit, please do not hesitate to call me or write.”

Thus, there was special interest in whether General Kim would have an opportunity to meet with Trump and personally deliver a letter on behalf of the North Korean leader.

General Kim, a vice chairman of the North’s ruling Workers’ Party Central Committee, would be the highest-profile Pyongyang official to visit the United States since 2000. At that time, Jo Myong-rok, a vice marshal of the People’s Army and special envoy to late North Korean leader Kim Jong-il, met U.S. President Bill Clinton at the White House in October 2000. Jo’s visit, in turn, was followed by Secretary of State Madeleine Albright’s visit to Pyongyang later that month.

It is expected that the former spy chief will meet U.S. Secretary of State Mike Pompeo, who previously served as director of the Central Intelligence Agency.

General Kim formerly ran the People’s Army’s Reconnaissance General Bureau, the regime’s main spy agency, and has been at the forefront of many talks, including leading a high-level delegation to South Korea for the PyeongChang Winter Olympics in February and, most recently, accompanying the North Korean leader in his second summit with South Korean President Moon Jae-in last Saturday. The two met at the beginning of April and again in early May, during Pompeo’s two visits to Pyongyang.

Because logistics and details are being ironed out in other meetings, Kim and Pompeo are likely to discuss the larger agenda for a North-U.S. summit, if it takes place as planned on June 12 in Singapore, including possibly a broad denuclearization deal. 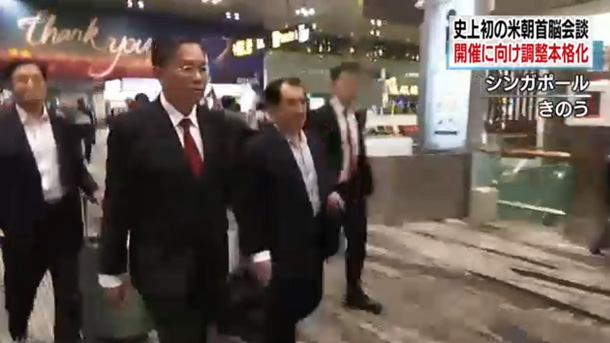 Kim flew into Beijing Capital International Airport Tuesday morning on the North Korean flag carrier Air Koryo. It was confirmed that he had reservations to fly to New York from Beijing on an Air China flight Wednesday afternoon. He is accompanied by Choe Kang-il, a senior diplomat handling North American affairs in North Korea’s Foreign Ministry.

Since Kim is spending a day in Beijing before flying to New York, it is likely that he will also have reached some consensus with China before entering talks with U.S. officials. Kim was greeted in Beijing by the North Korean ambassador to China and did not respond to reporters’ questions as he left the airport, departing in an embassy vehicle. It is unclear if Kim and Choe will head to Washington from New York. Kim is a controversial figure, who has been accused by past South Korean administrations of being the mastermind of the 2010 torpedoing of the South’s Cheonan warship, which killed 46 sailors. Washington imposed sanctions on Kim in 2010.

In the course of the past week, Pyongyang ramped up hostile rhetoric against Washington, threatening a possible nuclear showdown, and Trump, in turn, suddenly canceled the Singapore summit while foreign journalists were in North Korea to witness the dismantlement of its Punggye-ri nuclear test site. After a roller-coaster ride last week, topped by a surprise inter-Korean summit Saturday, Washington and Pyongyang officials have been speeding along pre-summit talks. In Singapore, Joseph Hagin, the White House deputy chief of staff for operations, is leading a U.S. delegation in discussions with North Korea’s Kim Chang-son, director of the North’s State Affairs Commission Secretariat, considered equivalent to a chief of staff.

The two delegations arrived in Singapore on Monday and were expected to discuss logistics, protocol and security, along with how to handle press and finalizing the venue of the summit.

Similarly, Sung Kim, a former U.S. top nuclear envoy and current ambassador to the Philippines, was leading talks with North Korean Vice Foreign Minister Choe Son-hui at the Tongilgak building on the northern side of Panmunjom. The diplomats began talks on Sunday.

U.S. President Trump and Japanese Prime Minister Shinzo Abe agreed on a “shared imperative” to achieve the “complete and permanent dismantlement of North Korea’s nuclear, chemical, and biological weapons and ballistic missile programs,” according to the White House on Monday.

In a statement on a phone call between the two leaders, the White House confirmed they would meet again to continue coordination “in advance of the expected meeting between the United States and North Korea.”

In recent weeks, the White House has raised the concept of a “permanent, verifiable, irreversible dismantling,” or PVID, of North Korea’s nuclear arsenal, terminology that could indicate a more hard-line approach to denuclearization. It is a slight departure from the expression that has customarily been used by Washington and other countries up to now: the complete, verifiable and irreversible dismantlement, or CVID, of North Korea’s nuclear weapons program.

The Wall Street Journal reported that the White House had been prepared to announce additional sanctions Tuesday but decided Monday to indefinitely delay the measures while talks with North Korea about the summit proceeded, citing a U.S. official.

The American and Japanese leaders last held a summit on April 17 and 18 in Trump’s Mar-a-Lago resort in Florida. Kyodo News reported that arrangements are being made for Abe to visit Washington on June 6 and 7, citing Japanese government sources, ahead of an upcoming meeting of G7 leaders of industrial powers from June 8 to 9 in Charlevoix, Canada.

Secretary of State Pompeo revealed that he discussed with North Korean leader Kim what is being called a complete, verifiable, irreversible guarantee of his regime’s security, or CVIG, in return for its CVID.

Pompeo recalled his talks with North Korean leader Kim and said, “He and I spoke about what assurances were going to be provided to him. These were assurances that would clearly have to be capable, in the same way that we’re demanding a permanent, irreversible, verifiable denuclearization. In that same way, we have to provide him assurances that extend beyond the end of the negotiations as well.”

His remarks indicate that in the same way that the United States is demanding CVID or PVID, from the North, it will be in exchange for an equally solid guarantee for the survival of the Kim regime.

“We had a discussion exactly in this vein,” continued Pompeo. “It is the case that we’re going to have to make commitments that will extend well beyond that.”

Should a summit between Trump and Kim be fruitful, it is likely a deal would be reached on some form of denuclearization in exchange for some guarantees for the Kim regime by the United States, whether it is in the form of forging formal bilateral diplomatic relations or declaring an official end to the 1950-53 Korean War and sealing a peace treaty.

Pompeo said it’s not just about holding a summit and striking a deal but “about the outcome.”

“It’s about achieving this permanent, physical change and transformation that will have the opportunity to change the world, and it’s corollary to a fundament change in North Korea,” he said, which would lead Pyongyang “to have an opportunity for prosperity.”