Three-way summit not a certainty

Three-way summit not a certainty 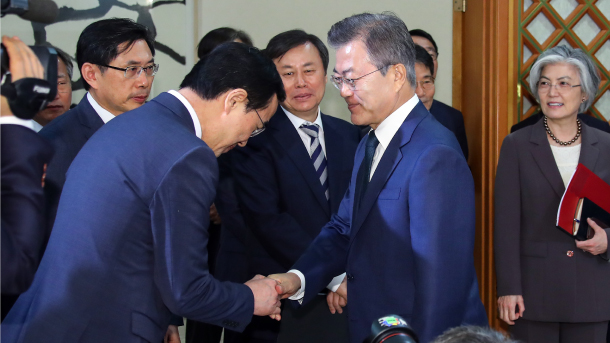 A senior Blue House official said Tuesday the possibility of a trilateral summit involving the two Koreas and the United States in Singapore hinges on the outcome of talks between U.S. President Donald Trump and North Korean leader Kim Jong-un, if they take place.

The senior official maintained the presidential office’s position made on Monday in which the idea of a trilateral meeting among Moon, Kim and Trump was “correlated” to the outcome of a June 12 Kim-Trump summit, which seems to be back on track days after it was abruptly canceled by Trump last Thursday. “This is correlated to the outcome of the North-U.S. summit,” said the official speaking on condition of anonymity.

That remark echoes a comment made by Moon at a press conference Sunday describing his second summit with Kim in which he said he had the “hope of pushing for a declaration to end the [Korean] war through holding South-North-U.S. summit talks should the North-U.S. summit be successful.”

South and North Korea have technically been at war since 1953 as the three-year Korean War ended in armistice, not a peace treaty.

While the armistice was signed by the U.S.-led United Nations Command and North Korean and Chinese militaries on July 27 in 1953, Moon suggested that a declaration to formally end the war could be done by the two Koreas and the United States, without China taking part, as it would take the form of a political statement. Replacing the 65-year-old armistice treaty with a peace treaty, however, would likely require consent from China as it is a signatory to the armistice treaty.

A tweet by Trump last Friday saying that his summit with Kim could be “extended beyond that date [June 12]” has fueled speculation that he was referring to a possible arrival of Moon in Singapore for talks on June 13.

On the talks proceeding in the border village of Panmunjom between an American delegation led by former U.S. Ambassador to Korea Sung Kim and a North Korean delegation led by Choe Son-hui, a vice foreign minister who has specialized in dealing with the United States, the Blue House official said Moon had no plan to meet with members of the U.S. delegation.

The official also denied media reports that the Blue House lent the U.S. delegation vehicles for their drive to the border village.

The North’s delegation, also comprised of five members, will be led by Ri Son-gwon, chairman of the North’s Committee for the Peaceful Reunification of the Country, a cabinet-level organization within the North Korean government in charge of relations with South Korea. The other four are: Kim Yun-hyok, vice minister of railways; Won Kil-u, vice minister of physical culture and sports; Pak Yong-il, vice chairman of the Committee for the North’s Peaceful Reunification of the Country; and Pak Myong-chol, vice chairman of the National Economic Cooperation Committee, a cabinet-level agency overseeing South-North economic cooperation.