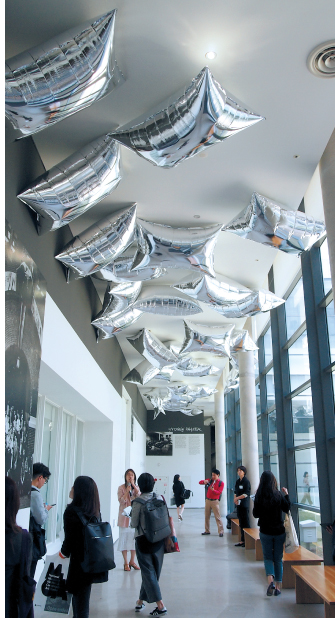 There isn’t a painting in sight at this curious exhibition. In their place, mysterious machines fill the halls, and visitors must decode their purpose. Silver balloons float around the hallway, a bicycle wheel turns slowly by itself and a dust-filled box follows the beat of visitors’ hearts.

If this sounds like an exhibition that may be more at home in a science expo than an art museum, you’re on the right track. The works created by Experiments in Art and Technology (E.A.T.), blur the lines between art and technology.

E.A.T. is a New York-based non-profit organization founded in 1967 by artists and engineers. The organization used technology to create art, and significantly influenced the way technology is incorporated into society. The founders of E.A.T. included well-known figures such as pop artist Robert Rauschenberg, performance artist Robert Whitman and engineers Billy Kluver and Fred Waldhauer. These leaders collaborated with other renowned artists such as Andy Warhol and Korea’s Nam June Paik.

“E.A.T. (Experiments in Art and Technology): Open-ended” is the first retrospective ever held in Korea of the works created under E.A.T.’s multidisciplinary umbrella. The exhibition is now open at the Museum of Modern and Contemporary Art in central Seoul, and will run until Sept. 16.

The show includes 33 gadgets and machines that were created over the course of the 20th century by the organization and some 100 documents from the E.A.T. archive. The exhibition examines how art and technology were brought together by the power of imagination and resonate with modern day audiences. It also poses open-ended questions on how art and technology can coexist.

“The 1960s was a time when sudden developments in technology brought television to the home and took men to the moon,” said curator Park Deok-sun. “Despite the many comforts that came along with such developments, people were afraid of the power of such technology and [the possibility of] losing their jobs to automatic machines. The [members of] E.A.T. came together in hopes of relieving such frustrations and bringing technology closer to people’s lives.”

The height of E.A.T. was during the 1960s and ’70s when the idea of combining art and technology was fresh. Works from this period take up most of the exhibition, which covers four sections of the museum. “Era of Collaboration” starts off the exhibition with eight pieces from the 1960s in which artists and engineers collaborated before the foundation of E.A.T. Nam June Paik’s “Magnet TV” (1965, reproduced in 1995) and Robert Rauschenberg’s “Tracer” (1962) are on display in this room. 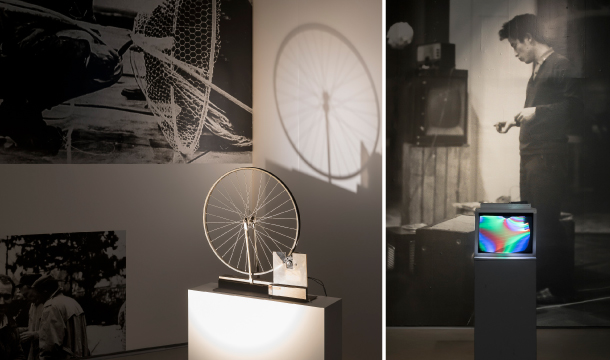 “E.A.T. (Experiments in Art and Technology): Open-ended” features works by various artists mostly created during the 1960s and 70s. The exhibition includes Andy Warhol’s “Silver Clouds” (1966), far left, Nam June Paik’s “Magnet TV” (1965), top, and Robert Rauschenberg’s “Tracer” (1962), above. E.A.T. sought to bring together art and technology in an era when the two were usually thought of as separate fields. [YOON SO-YEON, MMCA]

“Development of E.A.T.,” the second section, is the highlight of the show. It recounts the founding of the organization and how it came to expand its horizons through experimental projects. This section contains the most eye-catching works, including Robert Whitman’s “Straight Red Line” (1967), a laser projection, Hans Haacke’s self-explanatory named “Ice Table” (1967) and “Heart Beats Dust: Cone Pyramid” (1968) by Jean Dupuy, where dust beats along to the audience’s heart when they bring a stethoscope to their chests.

The section that follows, “9 Evenings: Theatre & Engineering,” is also the name of a series of 10 performances between 10 artists and 30 engineers held in 1966. This section is mostly comprised of videos and documents from the era.

“Expanded Interactions” contains newer works from the 1970s to the present day, including Anna Lundh’s “Q&Q-2028,” an ongoing mixed-media installation that invites visitors to submit questions on-site or online about the future. The museum held a performance on May 26 where Lundh read people’s questions from 20 years ago followed by a question from 2018.