A playground that kids can call their own : Pyeon Hae-mun adds a bit of adventure to each of his designs

A playground that kids can call their own : Pyeon Hae-mun adds a bit of adventure to each of his designs 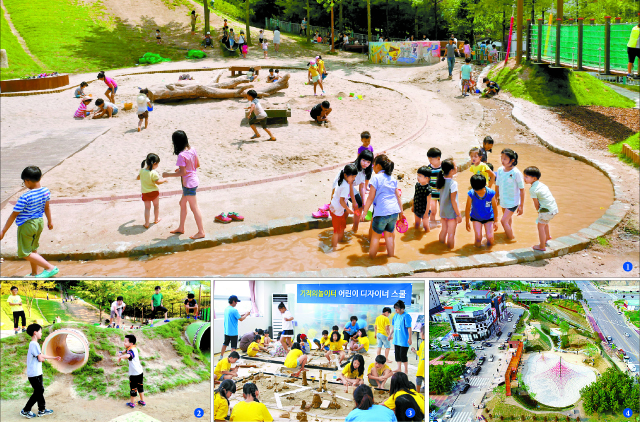 The Hoban 3 Park in Suncheon, South Jeolla, is home to what is known to neighbors as the Miracle Playground.

Built two years ago, the play area barely has any of the standard apparatus like slides, swings and seesaws. Instead, there is a grassy hill on top of a wide sandy field, an old hackberry tree, tunnels, an old-fashioned pump where kids can draw water and a shallow water stream.

Suncheon has opened two more similar playgrounds, and is planning to build 10 more around the city by the end of 2020. The mastermind behind the project is playground designer Pyeon Hae-mun.

“When I was young, I had fun running around in the mountain village in Sadang-dong, southern Seoul, where there wasn’t a single decent playground, and I realized how my memory of the freedom I felt back then gave me strength throughout my life. Then I began to wonder what kind of memories children these days hold onto,” said Pyeon in an interview with the JoongAng Sunday, an affiliate of the Korea JoongAng Daily.

A. In the past, children would sing when they played. It’s like the game kids used to play; building a “toad house” and singing the song that goes along with it. But children have begun to stop playing such games and the songs have also disappeared. I felt I needed to bring play back [for the children].

Can you explain what you meant when you said ‘It’s safer when it’s dangerous’ in one of your books?

First and foremost, I need to make something clear. I’m not saying we need to let kids put themselves in danger. There are two types of danger - hazard and risk. There are hazards at the playground that kids cannot predict such as a broken piece of glass or a rusty banister, which must be taken care of before kids get hurt. However, I think it is necessary for adults to be open to risks that kids can fully acknowledge and control on their own. Children need to experience getting scratches here and there when they play so that they can avoid bigger accidents. It’s kind of like a vaccination. Children have the right to get bruised. That’s how they learn to avoid getting hurt on their own. It is actually more dangerous for a child to grow up without knowing danger. 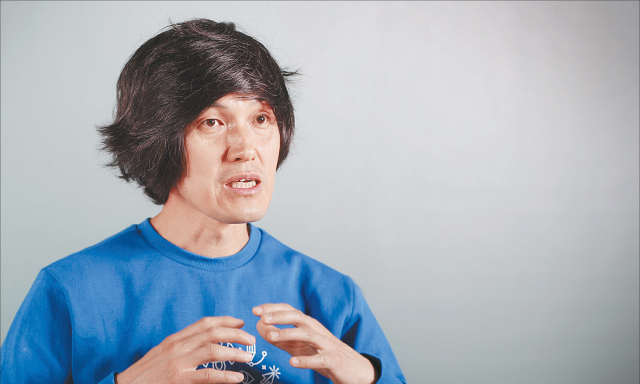 Playground designer Pyeon Hae-mun wants to build 10 more playgrounds that fit the needs of children by the end of 2020. [SHIN IN-SEOB]

But we should not just let kids get hurt, right?

There are about 70,000 playgrounds in the country, and wherever you go, you will see a standardized, boring playground with the following play equipment - an outdoor playset, a swing, a seesaw and a ground mat. People have been too focused on creating a safe playground that the challenging and adventurous aspects of a playground have disappeared. These boring and unexciting playgrounds bring about an even bigger danger. If you have been to a playground even once, you must have seen the words “Please do not ride backwards.” Next to the sign, you will see kids sliding down backwards. Safe playgrounds are actually more exposed to danger. After a long period of research, Germany came up with the conclusion that a safe playground is the most dangerous one. This is because it minimizes curiosity and curtails children from getting hurt by trying something different.

What do you think is the biggest problem with modern playgrounds?

What inspired you to name your playground the Miracle Playground?

There had not been a children’s library where you could read your books laying down or walking around. However, the Library of Miracles (a child-friendly library that opened in Suncheon in 2003) broke this system, and soon after, libraries all around the nation followed suit. Our Miracle Playground took a step further than the library. We had local preschoolers and elementary students design their own playground. And we used almost all of their ideas. After we invited parents and neighbors to take part in making playground designs, we created a finished project that everyone appreciated. It was the same for our second and third playgrounds as well.

How did the kids react?

When we asked what they liked, they answered, “My friends are here, and I can do anything I want here unlike the other places that are filled with warnings that tell us not to do things.” Here, children can move and break whatever they want. It’s to the point that three to four of the playground’s pump handles break every month. The parents seem to love the playground even more. They say that the kids are less frustrated at home than before. They can’t help but be happy after having a great time at the playground. Also, they said that at first, most of the kids had a hard time climbing up the hill, but now they climb up with ease. Everyone is happy that the children are growing stronger and healthier. On top of this, mothers have begun to look after the other children as well, allowing their parents to take a break, and the neighborhood community has become stronger.

I heard the local government has been supportive as well.

The executive in charge of the city, the county and the town have all come and told me that the local parents pressed them to come and check out the place. As the word spread, it was inevitable for parents to show great interest. With the Seoul Metropolitan Office of Education, I decided to oversee projects in changing school playgrounds. I’m currently in the process of making a demonstration at two elementary schools. This also requires the help of the students. A playground is an important space where children can learn democracy. It’s hard to become a democratic citizen from just learning in school. At a playground, kids can each become their own master, experience conflicts with other children with different values and learn how to make peace with others.

But aren’t parents nowadays more interested in sending their kids to academic institutes than playgrounds?

I think it’s necessary for parents to embrace the fact that children need freedom and playtime. Why do children need education? It’s so that they can grow up balanced. How long will parents let their children just play games in their rooms? To kids, play is food.

Is there anything you’d like to say to parents?

I would like to tell them to leave the children be and stop trying to control them. Parents will be able to communicate with kids once they stop trying to teach them and start seeing things from their perspective. Playing is like air to children. It is the parent’s role and responsibility to make sure children are getting what they need. Playing is also important for a child’s health. There are so many kids who suffer from obesity, juvenile diabetes and depression.

When we ask kids the definition of playground, they say that it is a place where they can go when their parents allow them to go. If we want to change the playground, we must first change the minds of parents. This is why I’m preparing a campaign called “Play Start.” Our aim is to provide information to parents on how they should allow their children to play periodically, from their infant years to when they get older. We face a low birth rate because it’s getting harder to raise children.