22 years of car making ends for city of Gunsan

22 years of car making ends for city of Gunsan 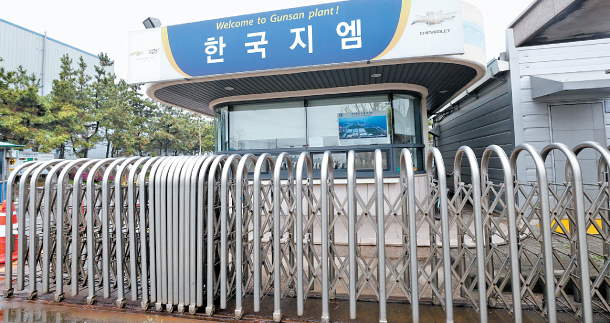 The file photo shows GM Korea’s Gunsan plant which is scheduled to be shut down today. [JOONGANG PHOTO]

The plant was opened in 1996 by Daewoo Motors to produce the Nubira compact. Most recently, it produced Chevrolet Orlando SUVs and Cruze sedans. The local economy relied heavily on the factory.

Of the 1,800 workers, 1,200 took early retirement packages. Around 200 will be reassigned to GM Korea plants in Bupyeong, Incheon, and Changwon, South Gyeongsang. The remaining 400 will take unpaid leave and wait for openings at the three other factories.

Once the already produced Orlandos and Cruzes are sold, the models will be discontinued in Korea.

That announcement sparked a three-month negotiation between the Korean government, workers and other stakeholders to keep GM from leaving Korea altogether.

Gunsan’s low operation rate was a major factor behind its closure. For the past three years, the plant has been operating at 20 percent capacity because its Orlando and Cruze models weren’t selling well in Korea.

The withdrawal of the Chevrolet brand from the European market in 2016 also played a critical role because models made in Gunsan were exported there.

And yet labor costs continued to rise. The ratio of labor cost to the factory’s sales rose from an average of 8 percent from 2010 to 2013 to 16 percent last year.

Workers’ base pay rose by at least 3 percent annually since 2013 and incentive payments rose by an average of 10 million won ($9,260) every year.

GM Korea has managed to survive for the time being, although there still are many obstacles to overcome in the future to maintain a sustainable business.

General Motors decided to convert 3.2 trillion won worth of debt into equity by next month. The headquarters also promised to not sell any of its 77 percent stake in its Korean affiliate for the next five years. It will start producing in Korea two new models that are relatively popular as well.

GM Korea launched a revamped Spark model last week and will launch an imported Equinox SUV at the Busan International Motor Show in the first week of June.