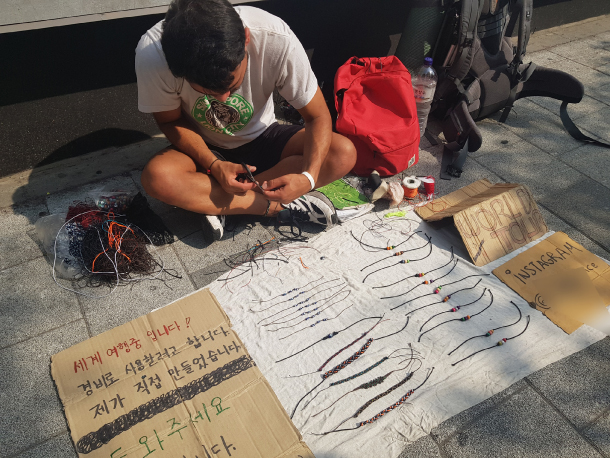 A 21-year-old traveler from Turkey who goes by the moniker Emre is selling homemade bracelets near Hongik University in western Seoul on Monday to raise funds for his travels. [KIM JI-A]

Next to exit nine of Hongik University Station in western Seoul on Monday stands Denis Khvoinov, a Russian backpacker, with his eyes covered with a bandage and arms wide open.

He wants to give you a hug. But not for free.

“I’ve been offering blind hugs for three hours in Seoul every day to try to finance my travels here,” Khvoinov told the JoongAng Ilbo. “I came here because I like this country, but I don’t know how long I’ll be able to afford to stay.”

Standing next to Khvoinov was his friend Vladislav. The two took turns offering free hugs to strangers, with a sign at their feet explaining how they were financing their stay in Korea.

The pair began their journey three months ago and backpacked through Kazakhstan, Hong Kong and Macao before arriving in Seoul last week.

“We can’t say how much we earn every day by offering free hugs,” Khvoinov said.

Call it a trade secret among begpackers, or backpackers who finance their travel expenses on the streets by busking, selling photographs they took during their travels, or as in Khvoinov’s case, offering blind hugs to stressed out East Asians.

Begpackers are a fairly new phenomenon for Seoul and largely restricted to the Hongik University neighborhood, Insa-dong and Myeong-dong in central Seoul.

A 21-year-old traveler from Turkey who goes by the moniker Emre was selling homemade bracelets near the university on Monday.

“Each customer can decide how much he or she wants to pay for a bracelet,” Emre said. “I began traveling with $3,000, and traveled through five countries in the past seven months, including Vietnam, Cambodia and Thailand. Today, I sold three bracelets and earned 15,000 won [$13.90].”

The reactions of passersby were varied.

“It’s pretty romantic, it shows that young people without savings can still travel as much as they want,” said Seo Eun-ji, a 22-year-old office worker.

Others see nothing but slackers.

“To travel to a foreign nation without a well-planned budget and trying to fund your expenses by begging is an irresponsible action,” said Kim Ji-hye, a 32-year-old who is unemployed and searching for a job.

“The other day, I received a note from a foreigner, who was a Caucasian with blond hair, who asked me to buy a national flag of Korea he was selling for 3,000 won,” said Lee Kyung-hwa, 24.

“He said that he has a hearing disability. I couldn’t tell, but I felt like he may have been using the fact that he is a Westerner to his advantage in begging on the streets.”

“I think Caucasians who travel through Seoul try to use the generally favorable image Koreans have about them to their advantage in raising money for their trips,” said Kim Min-sung, a 30-year-old office worker. “I saw a Russian couple in their 20s selling photos they’d taken during their trips together.”

The begpackers have become notorious in some Southeast Asian countries, especially when they go from begging on the streets to carousing in bars and red light districts.

Thailand established a regulation last year saying visitors on tourist visas must have at least 20,000 baht ($622.70) in cash when they enter the country. Vietnam’s Kien Giang province released a notice last August that forbade foreigners from begging on the streets after a photo of a Caucasian beggar went viral online.

Some experts agreed that some Caucasians can use the favorable image Koreans have toward Westerners to their advantage.

“As more Westerners realized that Koreans have a favorable image of them, the number of European and Western begpackers in Korea has been on the rise,” said Lee Taek-gwang, a British and American cultural studies professor at Kyung Hee University’s Yongin campus in Gyeonggi.

“I don’t know if Koreans would treat travelers from Southeast Asian or from African countries as nicely if they tried to raise money on the sidewalks.”

But begpacking is technically illegal for travelers on tourist visas.

“It’s illegal to earn money while on a tourist visa,” a police officer told the JoongAng Ilbo. “When we do rounds, we try to shut down these activities. But it’s hard to find every one of them.”