Dinos plummet out of KBO contention

Dinos plummet out of KBO contention 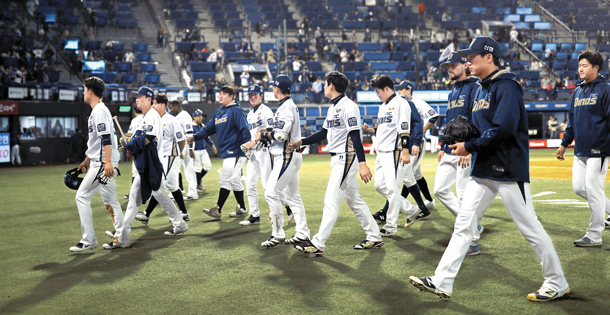 The NC Dinos walk off the field after a game against the Doosan Bears at Masan Baseball Stadium in Changwon, South Gyeongsang, on Sunday. [YONHAP]

NC Dinos’ fans have never really had to deal with losing. It’s not that the Dinos haven’t lost a lot of games - they’ve made it to the postseason four times, but never won - but they’re the only team in the KBO that has never had a bad year or floundered at the bottom of the table. 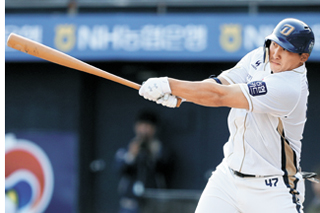 Na Sung-bum of the NC Dinos watches a hit during a game against the LG Twins at Masan Baseball Stadium in Changwon on March 25. [YONHAP]

The Dinos have always been good - until now.

The Dinos’ postseason streak has been impressive for such a young team. The club has only been in the KBO for five years, and yet 2013, the team’s debut season, was the only year that it didn’t make it to the final stages.

When the NC Dinos fell out of the top five on April 20, the fans weren’t that worried. They know that the Dinos were a strong team - a trip into the bottom five was always going to be temporary. But the Dinos didn’t bounce back like fans expected. One month later, on May 20, the Dinos fell to last place and have stayed there ever since.

At the start of the season, it looked like it was business as usual at Masan Baseball Stadium in Changwon, South Gyeongsang. The Dinos spent the first month vying for first place with the Doosan Bears and the SK Wyverns. A downward spiral in the middle of April developed into a disastrous month in May. As of 6 p.m. Thursday the Changwon-based team have only won six out of 24 games in May, and are now a full five games behind the Samsung Lions in ninth place, and 16.5 games behind the Bears in first place.

The Dinos have struggled with injuries for the last month, but the problem seems to run deeper than that. Statistically, the Dinos’ starters have played significantly worse this season, and the spate of injuries that hit the team in May have only compounded the problem.

Lim’s departure set the ball rolling in a disastrous way for NC. In the following weeks Lee Jong-wook, Mo Chang-min, Kim Seong-uk and Choi Joon-suk have all been excluded from the entry.

With half their starting lineup gone, the Dinos are in dire straits. Their team batting average is the worst in the league at 0.246, and their team ERA isn’t faring much better, at 5.06.

Outfielder Na Sung-bum seems to be the only starter left on the team that is still pulling his weight. While his team is busy having the worst season in the club’s history, Na is the only player with a batting average above 0.300. On May 30, the Dinos lost 10-4 against the Hanwha Eagles, but Na still had reason to celebrate - he extended his two-digit home run streak into its sixth season.

Na may have more reason to celebrate in the near future - rumor has it he has caught the eye of foreign league scouts. During the Dinos’ game against the SK Wyverns on May 8, a scout from the Toronto Blue Jays visited Masan Baseball Stadium in Changwon to watch Na play.

Unfortunately, Na won’t be permitted to head to the majors just yet as KBO regulations require a player to play at least seven seasons in the league before they can enter the majors through the posting system. Although Na will have seven seasons under his belt at the end of this year, the Dinos were not in the KBO in 2012 and that season does not count as far as posting regulations are concerned.