KIM SEUNG-HYUN
*The author is a deputy political news editor of the JoongAng Ilbo. 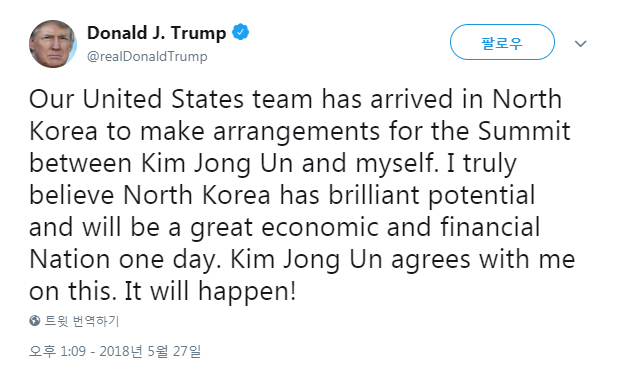 The evening is a stressful time to be in the office of a media organization in Seoul at the moment. The news cycle has recently developed a habit of completely changing in the late evening as U.S. President Donald Trump reaches for his phone and starts tweeting.

Reporters pulling the night shift are glued to Trump’s Twitter feed like its a time bomb waiting to go off, constantly checking to see if the tone of their whole shift has suddenly changed. The tension rises at about 10 p.m., or 9 a.m. in Washington, when Trump is most likely to act. Tweets fired out in the middle of the night in Seoul, including ones on the U.S.-North summit, have the power to change headlines in Seoul. Reporters in Korea are working “Trump overtime.”

As the officials at the international finance team at the Ministry of Strategy and Finance need to study the ever-changing global economic conditions, they are also closely watching President Trump’s tweets in addition to monitoring major news organizations such as The New York Times. The officials who have the Twitter notifications on are called “the Trump response team.”

Considering Trump’s power, I cannot help but feel that the tweets are unbearably light. It is especially so compared to the psychological pressure on South Korean journalists and officials on the other end. A similar criticism arose in the United States as well. In The Wall Street Journal and NBC’s joint study in January 2017, seven out of ten respondents found then president-elect Trump’s tweets negative. The messages written on impulse could bring unintended, serious consequences.

Some experts say that Trump’s impulsive nature is a plus that overwhelms North Korean leader Kim Jong-un.

Announcing the outcome of his second summit with Kim Jong-un on May 27, President Moon Jae-in said, “I ask for the understanding of the media for the one-day delay in the announcement due to North Korea’s request.” Is it too much to expect Trump to try a similar approach?