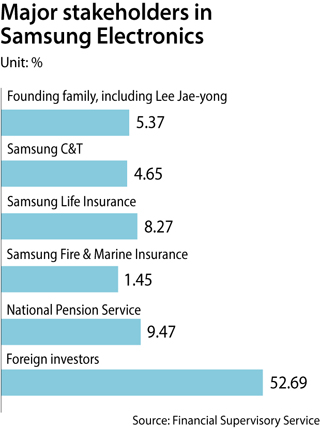 Samsung Electronics shares shot up 2.42 percent on Thursday over the previous day to close at 50,700 won ($47), largely due to two of the chaebol’s financial affiliates selling their stakes in the tech giant on Wednesday.

Financial Services Commission Chairman Choi Jong-ku repeatedly stressed that it would be best if Samsung Life Insurance, the de facto financial holding company of Samsung Group, sold off its stake in Samsung Electronics.

Fair Trade Commission Chairman Kim Sang-jo, in a meeting with executives of the top 10 conglomerates in Seoul on May 10, also warned that Samsung could face big consequences if it does not change its governance structure.

“The worst decision [Samsung Vice Chairman Lee Jae-yong] can make is allowing time to go by without making any decision,” Kim said.

J.P. Morgan and Goldman Sachs were in charge of selling the shares. Although neither company disclosed who purchased the shares, it is believed that foreign institutional investors were the buyers.

The insurance companies sold their shares in Samsung Electronics because of a regulation that prevents financial affiliates of conglomerates from owning more than 10 percent of a nonfinancial company.

Samsung Life Insurance had an 8.27 percent stake in Samsung Electronics and Samsung Fire & Marine Insurance owns 1.45 percent stake. The combined stakes of the insurance companies was below the 10 percent threshold, at 9.72 percent.

The sales reduced Samsung Life’s stake in the electronics company to 7.92 percent while the Samsung Fire & Marine Insurance’s stake dropped to 1.38 percent.

Samsung Electronics has been retiring its own shares since last year. The company has canceled almost 18 million common shares and 3.23 million preferred shares, which is about half of the shares the company issued. Samsung Electronics plans to cancel an additional 8.99 million shares that it owns, worth around 40 trillion won, by the end of the year. The company announced the cancellation at the beginning of the year as a move to increase shareholder value.

If the stock cancellations go as planned, the combined stakes that the two insurers have in Samsung Electronics would have been 10.45 percent, which would have violated the maximum 10-percent regulation.

It’s estimated that the selloff on Wednesday will bring down the stake the insurers have to 9.99 percent when Samsung Electronics’ share cancellations go through.

“Because of the stakes that the insurers have in Samsung Electronics, it is inevitable that they will have to sell the shares,” said Lee Byung-gun, a DB Financial Investment analyst. The selloff on Wednesday reduces the risk of Samsung running afoul of the law.