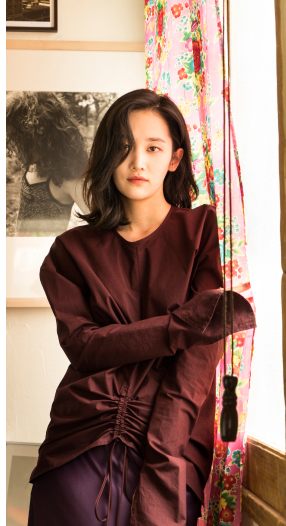 Many people were in awe last year when rookie actor Jeon Jong-seo was announced as the star of auteur Lee Chang-dong’s first movie since 2010’s “Poetry.” An inexperienced actor without any history in the entertainment industry, Jeon pushed her way through the fierce competition to join Lee’s mystery flick alongside recognized actors like Yoo Ah-in from “Veteran” and Steven Yeun from “The Walking Dead.”

Though she was criticized for covering her face in front of photographers at the airport on her way to attend the Cannes Film Festival last month, where “Burning” was screened, people remain interested in the rising star and what she will do next.

Playing a daring and free-spirited twenty-something Hae-mi, who makes a living out of being a part-time dancer trying to attract customers to a shop, Jeon initially didn’t chase after the role because she thought she had no chance of getting it. The audition took place only three days after she joined her current talent agency.

“I was craving an on-site film experience, but wasn’t desperate for the [‘Burning’] role,” Jeon said during an interview with the Korea JoongAng Daily in central Seoul on Tuesday. “That’s because I merely considered the audition to be the first out of the myriad of auditions that I would have to go through to finally land a part.”

Based off of a cryptic short story by Japanese novelist Haruki Murakami, “Burning” revolves around a struggling deliveryman named Jong-su (Yoo), who one day encounters his old friend Hae-mi. Through her, Jong-su meets Ben (Yeun), an enigmatic man with the unusual hobby of burning down vinyl greenhouses.

Reflecting the difficult realities of many youth in Korea today, the movie vied for the Palme d’Or prize at Cannes Film Festival, allowing Jeon a chance to appear at the prestigious film event after only her first feature. But to the 23-year-old actress, the invitation to Cannes did not mean much. Instead, the fact that she could reunite with the “Burning” cast and crew again put a smile on her face.

“I was happy about heading to Cannes, not because I was invited to the festival but because I could begin another journey with the co-stars and the director, who I really enjoyed working with,” said Jeon. “Perhaps that’s because I’m so inexperienced that I don’t know how happy I should feel about being invited to Cannes.”

While shooting “Burning,” Jeon, naturally, felt that everything was out of her control. On the first day of filming, she says she repeatedly made the mistakes of looking right into the camera and blocking the shot. The film jargon used on set was also unfamiliar to her, and it took a while to adjust.

“No matter how well people explained it to me theoretically, I just had to feel and experience it to get used to [the new environment],” said Jeon.

Though things were awkward on set, the actor quickly learned to naturally accept the role of Hae-mi. Lee asking the rookie actor to “feel the character as she is and to simply accept it” played a vital role in Jeon being able to immerse herself into the role.

“I guess [telling actors to just feel and accept the character instead of giving directions] is the filmmaker’s directing style. That means there were no rules that an actor had to follow. Instead, the actors needed to be able to just accept the role,” said Jeon. “Everything was derived from feeling. There were no standardized emotions.”

A free-spirited person who believes “there is neither a social frame nor a [right] answer to anything but only a social order people need to follow,” Jeon says she shares some similarities with Hae-mi in that they both have a world of their own in which they dream, enjoy themselves and feel happy.

Already in its second week since being released, reviews of “Burning” have been mixed, with some saying it is a masterpiece while others criticize it for containing too many mysterious elements, making the tale difficult to sympathize with.

When asked how she understood the film, Jeon said she did not interpret the film at all.

“I don’t think it’s a kind of movie that can be interpreted because a lot of elements from the movie just need to be felt in the heart with a mind wide open,” said Jeon.

But what she can say about the movie is that it shows the gap between the rapidly transforming world and how much people are struggling to accept those changes.

“The world is becoming a more convenient place to live thanks to advancements in technology. But our lives have become more challenging because people aren’t able to catch up with the changes,” said Jeon. She pointed at the fact that it has become almost impossible for young people to purchase a house in Seoul due to high real estate prices.

“[‘Burning’] shows the mysteriousness of this phenomenon, through the diverse emotions [of the young generation], including indignation, frustration and freedom.”

Continuously questioning herself to figure out those mysterious elements inserted in the flick also positively affected the actor. “The film got me to question myself on what direction in life I should take and what I should hold onto in life.”

Highly interested in women’s rights, Jeon hopes that she can get involved in movies that shed light on social issues.

“As someone who has just started a career in acting, I would like to do what I can within my range [to improve women’s rights]. So I hope to work on films that talk about women’s rights at the core,” Jeon said. “I hope people pay more attention on trying to create a better environment [for women].”

While she may be inexperienced, Jeon has a solid idea of what kind of life she wants to have as an actor.

“I want to become a happy person. Being an actor is a job I have, and I am a human being before being an actor. I hope that the profession doesn’t change who I am as a person.”