Exports rebound in May, but outlook isn’t great

Exports rebound in May, but outlook isn’t great 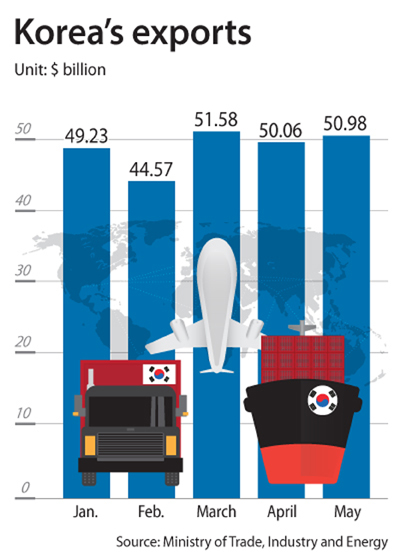 After unexpectedly falling for the first time in 18 months in April, Korea’s exports rebounded in May, up 13.5 percent compared to a year earlier.

But the favorable outlook might not last, as a heightening trade war between the United States and allies, including the EU, Canada and Mexico, is likely to hit Korean exports as well.

According to the Ministry of Trade, Industry and Energy on Friday, Korea’s exports grew by 13.5 percent in May, the first time growth has been in double-digits for four months, to nearly $51 billion. May’s growth is a dramatic change of direction from April, when exports declined 1.5 percent.

May’s unexpectedly high exports were not only the fifth-largest ever, but also marked the first time that the figure had exceeded $50 billion for three consecutive months.

The strong return of Korea’s exports was largely due to the continuing growth of the computer chip industry, which saw shipments reach an all-time high thanks to demand from the global market over the expansion of leading technologies including artificial intelligence and big data.

In May, Korea’s computer chip exports grew 44.5 percent year-on-year to $10.9 billion, which is an all-time record. Thanks to the continuing export growth of semiconductors, it now accounts for 21.3 percent of all exported goods from Korea, up from 16.7 percent a year ago.

Korea’s trade has been enjoying a surplus for 76 consecutive months.

However, the sharp increase in May is also in part because it is being compared with the sluggish performance in May 2017. After recording $50.8 billion in April 2017, exports plummeted to $44.9 billion in May 2017, lower than the monthly average of $47.8 billion.

Additionally, there are growing concerns over a trade conflict between the United States and its trading partners over the 25 percent and 10 percent steel and aluminum tariffs that the Donald Trump administration on Thursday decided to impose.

The economies that are affected by the tariffs swiftly responded, with some even promising to retaliate.

“These tariffs will harm industries and workers on both sides of the Canada-U.S. border and will disrupt supply chains that have made North American steel more competitive across the globe,” Trudeau said.

Canada, which is the largest supplier of steel to the United States, plans to slap tariffs on U.S. goods.

Jean-Claude Juncker, the president of the European Commission, labeled the move as “protectionism” and promised retaliation, while Mexico and France issued similar statements.

Although Korea is not directly affected by the tariffs, as it is one of the countries that has been exempted in exchange for a quota on its steel exports to the United States, the growing tension is expected to affect global trade growth.

In an April report, the World Trade Organization (WTO) estimated that the global trade market will grow 4.4 percent this year.

WTO Director General Roberto Azevedo, however, warned that the progress could be undermined “if governments resort to restrictive trade policies, especially in a tit-for-tat process that could lead to an unmanageable escalation.”

But the Trump administration may still have more tariffs in the works - the U.S. president recently raised the possibility of increasing tariffs on imported cars, citing protection of its national security.

Korea’s exports to the United States have already dropped 1.9 percent as shipments of automobiles, steel and consumer electronic goods have all shrunk, while exports to China grew.