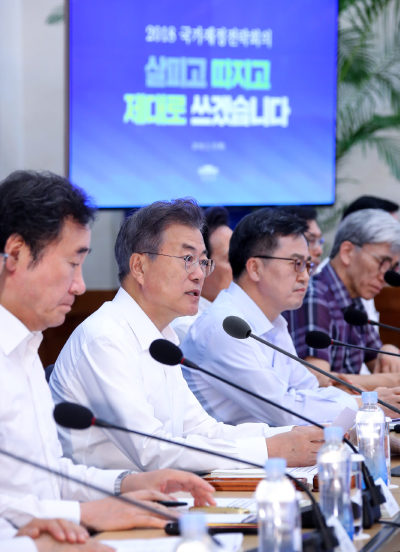 President Moon Jae-in dismissed concerns about the increased minimum wage’s effect on employment on Thursday as signs of a rift between the Finance Ministry and Blue House grow.

Moon brought up the topic during a policy meeting at the Blue House on Thursday with floor leader Hong Young-pyo of the ruling Democratic Party. Moon said that the minimum wage, which increased by 16.4 percent over last year, had a positive effect on workers’ incomes.

“[The minimum wage] has not only increased the income of workers, but also eased the [income] gap and contributed to increased income for middle-class households,” Moon said.

However, despite Moon’s positive outlook on the minimum wage’s impact on the economy, a recent study from Statistics Korea showed decreased monthly employment and a widening gap in income between the top and bottom tier of workers.

The study showed that, in the first quarter, those in the top 20 percent by income saw their nominal income grow by 9.3 percent compared to the previous year, whereas the bottom 20 percent saw their income drop 8 percent year-on-year.

Labor unions are currently up in arms against a reform bill that recently passed the National Assembly that might weaken the increase to the minimum wage scheduled for next year. Moon has promised to raise the minimum wage to 10,000 won ($9.31) per hour by 2020 from the current 7,530 won.

On Friday, Blue House spokesman Kim Eui-kyeom said that Moon came to the conclusion that the minimum wage increase had a positive impact on 90 percent of workers because of separate study he saw that showed that Koreans’ overall income went up.

“The 10 percent are the people that didn’t benefit from the increased minimum wage, as they are in the lowest 10 percent, who are people who have no jobs or run really small businesses with no employees,” Kim said.

However, when asked whether the statistics that Moon discussed during Thursday’s meeting were different than that provided by Statistics Korea, the spokesman said he didn’t know and said that the data was not yet disclosed to the public.

As the Moon government celebrated its first anniversary last month, concern about its income-led growth campaign’s effect on job opportunities has grown.

Despite the government’s supplementary budget, which is mostly aimed at increasing the number of quality jobs, the job figures so far this year have been disappointing.

Over the last three months, the number of new hires has remained below 200,000 every month. This is a stark contrast to last year, 300,000 new jobs were added every month on average.

The state-owned Korea Development Institute (KDI) think tank released a study on Thursday that projected it won’t be easy to continue to add 200,000 or more jobs a month.

While some blame for the disappointing job figures can be attributed to corporate restructuring in the automotive and shipping industry, including job losses due to the shutdown of GM Korea’s Gunsan plant in North Jeolla last month, market experts have started to look at whether the minimum wage increase and the 52-hour workweek policy, which will go into effect in July, have had an effect.

Moon said on Thursday that the he thought the government was not properly promoting the positive influence of the increased minimum wage to the public.

Finance Minister Kim Dong-yeon, on the contrary, has recently voiced concerns about the government’s economic policy.

He hinted that the government may have raised the minimum wage too steeply, and that reduced working hours might also hurt small businesses in the service industry, such as restaurants and convenience stores.

“There has been some controversy about the fall in employment, but based on the analysis by several research institutes using statistics from March, there was no notable fall in hiring, excluding some food and beverage businesses,” said Jang.

Moon’s comment on Thursday was interpreted as giving more weight to Jang’s view. They also spurred rumors that the Blue House will reduce the role of the finance minister.

The Blue House’s spokesman denied such rumors, and added that Kim is still spearheading the country’s economic policies.