Acing the test without teaching to it

Acing the test without teaching to it 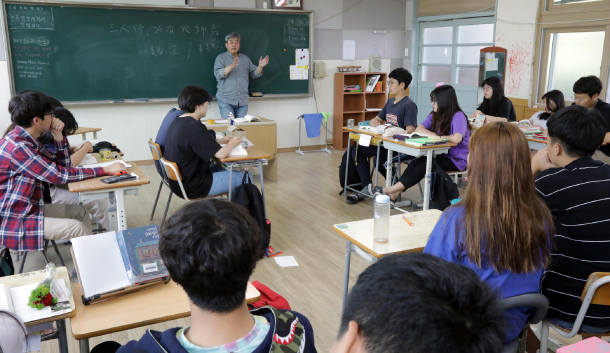 Principal Jang Dong-sik delivers a lecture on Confucian philosophy to students at Sophia School in Gwangju on May 17. [KIM KYUNG-BIN]

At the Sophia School in Gwangju, an open-ended curriculum defies the cramming and rote memorization that characterizes many Korean schools. Instead of learning formulas to ace the national college entrance exam, students are taught to develop their own values by reading a mix of Eastern and Western philosophy.

It came as a surprise, then, when one of the Sophia School’s graduates received a perfect score on this year’s College Scholastic Ability Test and was accepted to the prestigious Seoul National University. Two other graduates were also admitted.

Influenced by the philosophy of A.S. Neill and his Summerhill School in the United Kingdom, the Sophia School believes that education should “fit the child” rather than force them to abide by social norms. Students who wish to go onto college must take the High School Graduation Equivalency Examination, similar to the GED in the United States.

For the principal, Jang Dong-sik, grades are not a priority. Rather, the six-year alternative boarding school prides itself on developing students’ ethical values and logical reasoning skills.

“Getting a perfect score on the CSAT or getting into Seoul National University is only part of the results of this school,” Jang said.

“Our school values reading, critical thinking and debating, and places great importance on self-enlightenment through philosophy. This is not the time for students to study for tests but to learn the foundations of logical reasoning and the mind-set that comes with it.”

In one class made up of fifth-years, the equivalent of a high school junior, Jang delivers special lectures on Confucian philosophy. Last month on Teachers’ Day, he asked students to discuss a line from the Analects: “When I walk along with two others, from at least one I will be able to learn.”
One student, Lee Ha-jeong, raised her hand and said, “The quote reminds me of a time when I felt anxious about my future and my friend said, ‘Can’t we still have a purpose in life even if we’re not doing anything at the moment?’”

Jang took over the school three years ago when his predecessor retired due to health problems. His daughter was enrolled at the school, and he was heavily involved in the parents’ association. Eventually, he became a theater teacher and developed rapport with the staff.

Although many Koreans still look down on alternative schools as places where parents send their kids when they can’t adjust to mainstream schools, Jang doesn’t let that perception bother him.

“No matter where you go, there is always that 10 percent of people who are troublemakers,” Jang said. “But do you think things get better if you exclude that 10 percent? No. Of course we have troublemakers here, but instead of abandoning them like mainstream schools do, we consider how we will live and teach alongside them.”

In one classroom full of first-year students, Moon Sook-young was leading a discussion on poetry and using it as an impetus to teach methods of avoiding self-blame and anger. Two students were dozing off, but Moon didn’t seem to mind much.

“Students start showing their curiosity at some point,” Moon said, shrugging off the sleeping students. “When that happens, you have to seize the moment and guide them in the right direction.”

The school is different from others that “shove the educational norm of teaching English and math” to students by allowing “each student to create his or her own curriculum,” Moon said.

The students admit it takes time to get used to the boarding school’s eccentric environment, but once they do, they feel comfortable. The process usually takes three months, according to one parent.

“At first, it wasn’t easy living in this school surrounded by my peers 24/7,” one student said. “But I think I’ve adjusted to it now.”

Students read about 20 to 30 books per semester. The subjects range from philosophy and society to nature and the arts. The class size varies between three and eight students. Since opening in 2010, the school has graduated 91 students. 14 seniors are set to graduate next year.

“I think at this point it’s important to contemplate many things in my life,” Jang Eun-gyeol, a senior, said. “I can always prepare to go to college after I graduate.”