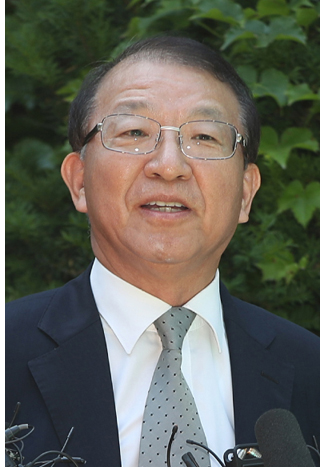 Yang Sung-tae, former chief justice of the Supreme Court, responds to allegations of power abuse outside his home in Seongnam, Gyeonggi, on Friday. [YONHAP]

A former Supreme Court chief justice accused of abusing his power during his tenure denied the allegations against him at a news conference outside his home in Seongnam, Gyeonggi, on Friday.

Yang Sung-tae, who served under disgraced President Park Geun-hye, faces a litany of accusations, including influencing decisions at the Supreme Court and even creating a blacklist of judges based on their political and ideological leanings. Most notably, he is suspected of deliberately using politically sensitive trials as bargaining chips to curry favor with the Park administration.

“As chief justice, I have never unjustly meddled or intervened in a Supreme Court or lower court trial,” Yang said. “The idea that I have distorted a trial or used it as a something to barter is just unimaginable.”

When asked about an alleged judicial blacklist, Yang said, “No person ever received disadvantages or unfavorable treatment because of [their political leanings], and I can state with certainty that I have never undertaken such measures.”

Yang was responding to findings by an internal investigation ordered by his successor, Chief Justice Kim Myeong-su, who was appointed in September 2017. On Monday, the team released documents from computers of the National Court Administration (NCA), the Supreme Court’s administrative body, which included directives hinting at coordination between the court and Park administration.

“Regarding cases that may have strong national or societal influences, or are about sensitive political issues,” one directive read, “communicate with the Blue House unofficially, and in advance, to make sure that the Supreme Court does not dole out unexpected rulings.”

One example of such a case is the trial of Won Sei-hoon, a former National Intelligence Service director. In February 2015, the Seoul High Court sentenced him to three years in prison for using the spy agency to meddle in the 2012 presidential election. Five months later, the Supreme Court sent the case back to the High Court.

A document released by internal investigators on Jan. 22 contained evidence that the NCA had reported to the Blue House how it was attempting to gauge the opinions of judges in the appellate court and said the outcome of Won’s trial was hard to predict.

The scandal has huge political ramifications since collusion between the Supreme Court and Blue House violates the principle of separation of power between the executive and judiciary. Chief Justice Kim on Thursday apologized for his predecessor’s alleged abuses after the results of the internal investigation were released and said, “The judicial branch will heed the people’s reproach and take this as an opportunity to reform.”

Kim also pledged to take disciplinary measures against those involved but has yet to make a decision on whether to bring criminal charges against his predecessor.

Meanwhile, the ruling Democratic Party on Friday called for a special probe into the allegations since the internal investigation results released on Monday showed evidence that Yang was appealing to senior aides of President Park to support his bid to establish another appellate court to handle the Supreme Court’s case overload.