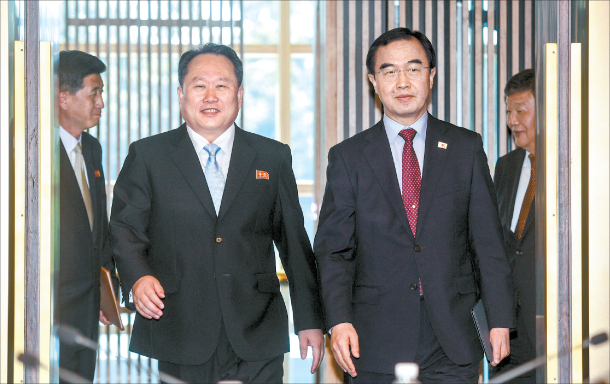 Ri Son-gwon, left, chairman of the North’s Committee for the Peaceful Reunification of the Country, and South Korean Unification Minister Cho Myoung-gyon walk into a meeting on Friday at the Peace House in the border village of Panmunjom. [YONHAP]

The two Koreas agreed to open a joint liaison office in the Kaesong Industrial Complex, an inter-Korean business project, and discussed hosting a celebration between the two countries for the first time in a decade during meetings at the border on Friday.

High-level delegations from both sides held their first meeting since the recent summits between South Korean President Moon Jae-in and North Korean leader Kim Jong-un. On the agenda was implementation of a declaration signed by the two leaders during their historic summit on April 27.

“The South and North agreed to open a joint liaison office inside the Kaesong Industrial Complex, where officials from both countries will be stationed, to guarantee inter-Korean cooperation,” the two delegations said in a joint statement on Friday. “We also agreed to continue cooperating via written communication on how best to celebrate the 18th anniversary of the June 15 declaration.”

From 2000 to 2008, under liberal South Korean administrations, the two countries celebrated June 15, the day when both sides held their first-ever summit in 2000. The joint celebrations ceased with the election of conservative Lee Myung-bak in the South. The North escalated its military provocations and tested a nuclear weapon for a second time in 2009.

The two delegations also agreed to hold additional inter-Korean meetings at the border village of Panmunjom, including one on military cooperation on June 14 and another on sports on June 18, where they expect to discuss an inter-Korean basketball game and fielding joint teams for the Asian Games in August. They will also hold a meeting on family reunions at Mount Kumgang in the North on June 22.

The Kaesong Industrial Complex, where the two sides hope to establish a liaison office, opened in 2004 as one of the fruits of the 2000 inter-Korean summit, but as relations soured between the two countries, the South Korean government closed it in February 2016. At the time, it was the last remaining inter-Korean business project. It remains unclear whether the complex itself will reopen.

According to a spokesman for the South Korean Unification Ministry, which handles relations with the North, the South Korean delegation also told the North it would cooperate on restoring the country’s forests after decades of deforestation in the North.

“We also told them that we need to discuss conducting joint research into the New Economic Map initiative,” the spokesman said. President Moon’s New Economic Map initiative aims to create a single market for the two Koreas in order to “lay the foundation for unification,” create jobs and generate growth for both countries. The road map envisions connecting the Korean Peninsula to the Chinese and Russian economies and developing a Northeast Asian economic community.

The South Korean delegation was led by Unification Minister Cho Myoung-gyon and included Vice Transport Minister Kim Jeong-ryeol and Vice Culture Minister Roh Tae-kang. The North was led by Ri Son-gwon, chairman of the North’s Committee for the Peaceful Reunification of the Country, a cabinet-level organization within the North Korean government in charge of relations with the South. Kim Yun-hyok, vice minister of railways; Won Kil-u, vice minister of culture and sports; and Pak Myong-chol, vice chairman of the National Economic Cooperation Committee, a cabinet-level agency overseeing inter-Korean economic cooperation, also attended.

The meeting was held at the Peace House in Panmunjom. It was originally scheduled for May 16, but North Korea canceled it the morning it was supposed to take place and blamed South Korea’s air force drill with the United States, which was held from May 11 to 25.

The high-level talks were rescheduled to Friday after Moon and Kim met on May 26 in a surprise summit that North Korea requested a day after U.S. President Donald Trump abruptly threatened to cancel his summit with Kim Jong-un.