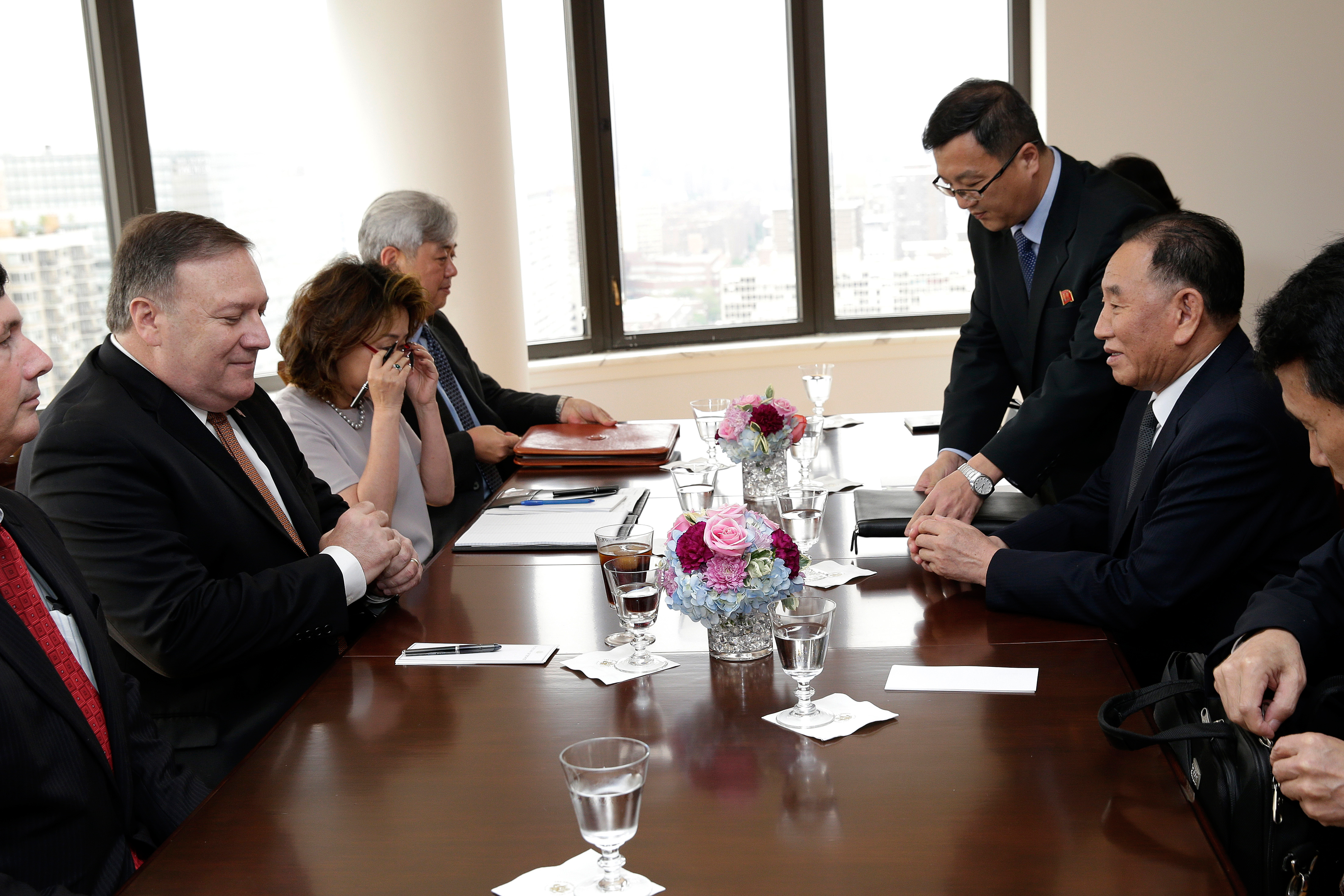 U.S. Secretary of State Mike Pompeo, left, meets with Kim Yong-chol, right, vice chairman of the North Korean Workers’ Party’s Central Committee, in New York on Thursday as both sides work toward salvaging a summit between their leaders. [AP/YONHAP]

U.S. President Donald Trump said on Thursday that there could be additional meetings with North Korean leader Kim Jong-un beyond their scheduled June 12 summit - or none at all.

“We’ll see,” Trump said before boarding Air Force One at Joint Base Andrews in Maryland. “And hopefully we’ll have a meeting on the 12th. That’s going along very well.”

While Trump said he wanted his first encounter with Kim Jong-un to be “meaningful,” he suggested one meeting might not be enough to cut a deal with North Korea on its nuclear arsenal, which now includes an estimated 60 warheads. “Maybe you have to have a second or third,” he said, “and maybe we’ll have none, but it’s in good hands.”

Trump has been coy on whether a summit with Kim Jong-un will actually happen, especially after he suddenly called off the meeting on May 24 in what many saw as a textbook move from his “Art of the Deal.” Since the abrupt cancellation, North Korea has been salvaging talks with the United States, and preparations for the summit now appear to be back on track.

The suggestion of a follow-up meeting with Kim Jong-un comes amid rising speculation in Seoul that South Korean President Moon Jae-in could join the two leaders in Singapore for a trilateral meeting. Among the possible discussion topics is a peace treaty to formally end the Korean War, which concluded in 1953 with a cease-fire. The two Koreas technically remain at war.

Moon has been pushing for a trilateral meeting. Earlier this week, the Blue House sent an official to Singapore, fueling speculation that the aide might be preparing for a meeting involving Moon, Kim and Trump. The presidential office denied the rumors, saying the dispatch was preparation for a summit between the leaders of South Korea and Singapore in July.

Kim Yong-chol, director of the United Front Department, which is responsible for inter-Korean relations, had two meetings with U.S. Secretary of State Mike Pompeo on Wednesday and Thursday to hash out details of the summit.

His trip to Washington to serve the role of messenger for Kim Jong-un was confirmed by Trump on Thursday. “I believe they’ll be coming down to Washington on Friday,” he said at Joint Base Andrews, “and a letter is going to be delivered to me from Kim Jong-un.”

Trump said he looked forward to greeting the North Korean delegation. Their meeting could include a formal announcement reinstating the summit between Trump and Kim Jong-un.

Kim Yong-chol is the highest-ranking North Korean official to visit the United States since 2000, when Jo Myong-rok, a vice marshal, visited Washington and met with U.S. President Bill Clinton to arrange a summit with Kim Jong-il, the father of Kim Jong-un. 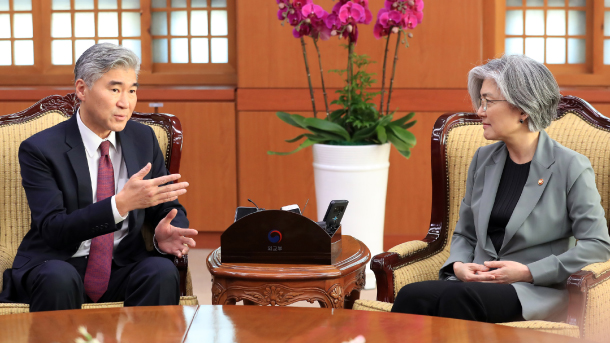 South Korean Foreign Minister Kang Kyung-wha, right, holds a meeting with U.S. Ambassador to the Philippines Sung Kim, a former envoy in nuclear talks, at the Ministry of Foreign Affairs in central Seoul on Friday, following Kim’s meetings with North Korean diplomats in Panmunjom over the past week. [YONHAP]

At the time, Jo arrived in Washington and attended official activities in a business suit but walked into the Oval Office dressed in a military uniform decorated with medals, a reminder of the confrontational history between the two countries. The envisioned summit never came to fruition, halted by a change of power in the White House. In his 2002 State of the Union address, President George W. Bush included North Korea in his “axis of evil” line.

Kim Yong-chol, a four-star general, formerly ran the People’s Army’s Reconnaissance General Bureau, the main intelligence agency, and is the alleged mastermind behind the 2010 torpedoing of the South Korean Cheonan warship, which killed 46 sailors. He has been the target of U.S. Treasury sanctions since 2010 and was believed to have traveled to New York on a special waiver by the State Department. The special waiver was thought to have been expanded to allow the general to set foot in the U.S. capital.

His anticipated meeting with Trump suggests that talks between Pyongyang and Washington on preparations for the summit have been going well. Most analysts said the meeting between Trump and Kim Yong-chol would only happen once the two sides narrowed down the differences in their position on a nuclear deal.

After his meeting with Kim Yong-chol in New York on Thursday, Pompeo said the two sides made “real progress” during their three days discussing the agenda items for the summit. “Through these series of meetings, I am confident we’re moving in the right direction,” he said.

Pompeo continued to affirm Washington’s firm objective from the summit: complete, verifiable and irreversible denuclearization. He again promised a “bright path” for North Korea if it complies. “We envision a strong, connected, and secure, prosperous North Korea that maintains its cultural heritage but is integrated into the community of nations,” he said. Failing to have the meeting, Pompeo said, would be “nothing short of tragic to let this opportunity go to waste,” echoing words from Trump’s letter canceling the summit.

The secretary of state also borrowed language from Moon’s remarks on Sunday that cutting a deal with the North would “change the flow of history” and said it would take “bold leadership” for Kim Jong-un to “seize this once-in-a-life opportunity to change the course for the world.”

The Blue House on Friday welcomed news of Kim Yong-chol’s expected trip to the White House, saying it was a positive development.

“Since this is an ongoing situation, it will be inappropriate for us to make statements on the matter,” a senior presidential official said speaking on the condition of anonymity. “We are carefully and closely watching the unfolding situation.”

The official added that the Blue House saw Kim Yong-chol’s delivery of Kim Jong-un’s letter as a sign that “preparations for the North-U.S. summit are going in the right direction.”

When asked whether Moon would join in three-way talks after the summit, the official declined to answer, only saying the Chung Eui-yong, the national security adviser, was in close contact with the White House’s National Security Council.

A team of American negotiators led by Sung Kim, the U.S. ambassador to the Philippines and former envoy in nuclear talks, stayed in Seoul on Friday after going through a second round of talks with a North Korean delegation led by Vice Foreign Minister Choe Son-hui on Wednesday on the northern side of Panmunjom.

On Friday afternoon, South Korean Foreign Minister Kang Kyung-wha met with Sung Kim, who called the recent developments “a very important moment on the Korean Peninsula.” He acknowledged that “there’s much work left before the proposed summit,” but added, “We’re moving in the right direction.”