Trump meets with North Korean official, says June 12 Singapore summit is back on

Trump meets with North Korean official, says June 12 Singapore summit is back on 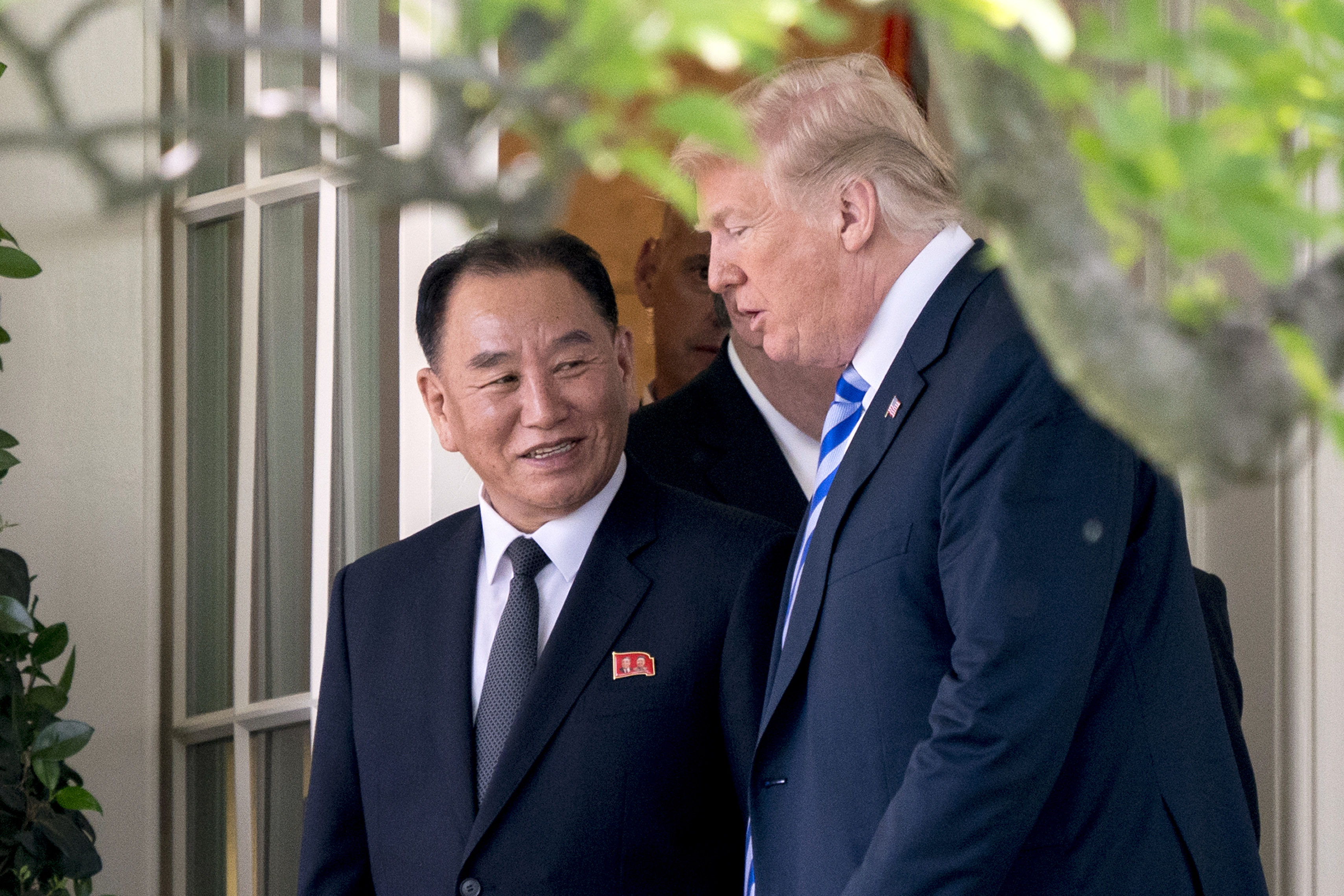 U.S. President Donald Trump, right, talks with Kim Yong-chol, a close aide to the North Korean leader, after their meeting in the Oval Office of the White House in Washington on Friday. [AP/YONHAP]

U.S. President Donald Trump said that his summit with North Korean leader Kim Jong-un is back on for June 12 in Singapore, after meeting with the highest-ranking official from Pyongyang to visit Washington in 18 years on Friday.

"We'll be meeting on June 12 in Singapore," Trump told reporters at the White House, after Kim Yong-chol, the influential vice chairman of the North’s ruling Workers’ Party Central Committee, delivered a personal letter from Kim Jong-un.

The announcement comes a week after Trump abruptly canceled through a letter on May 24 a planned summit following hostile messaging from Pyongyang. Since then, there have been a flurry of diplomatic, logistical and high-level meetings between North Korean and U.S. officials to get the summit back on track.

“I canceled it in response to a very tough statement,” said Trump, referring to North Korea’s recent bellicose rhetoric against Washington. “I think we’re over that — totally over that. And now we’re going to deal, and we’re going to really start a process.”

The president added, “We would be making a big mistake if we didn’t have it. I think we’re going to have a relationship, and it will start on June 12.”

Trump said his meeting with Kim Jong-un, he believes, will be “ultimately, a successful process,” adding, “We’ll see.”

Kim Yong-chol, who also serves as director of the United Front Department, which is responsible for inter-Korean relations, met with U.S. Secretary of State Mike Pompeo over Wednesday and Thursday in New York to hold talks in preparation for a possible summit. Kim left New York for Washington on a convoy of SUVs early Friday.

Trump told reporters that his meeting with the North Korean leader’s envoy that afternoon “went very well,” adding it was a “get-to-know-you kind of a situation.”

The meeting lasted over an hour at the White House Oval Office and Trump received in person the letter from Kim Jong-un, though he didn’t open it on the spot.

"That letter was a very nice letter,” Trump told reporters, without having read the letter from the North Korean leader. He joked, "I could be in for a big surprise, folks.”

Trump said that “at some point” it may be “appropriate” to share its contents with the public. “Maybe you’ll be able to see it, and maybe fairly soon.”

The president was confirmed by the White House to have later opened the letter.

Trump said on his meeting with Kim in the Oval Office, “It was actually very interesting because this was literally going to be the delivery of a letter, and it ended up being a two-hour conversation with the second most powerful man in North Korea.”

Kim, a four-star general, formerly ran the People’s Army’s Reconnaissance General Bureau, the regime’s main intelligence agency. He has been the target of U.S. Treasury sanctions since 2010 and was believed to have traveled to New York and Washington on a special waiver.

He is the highest-ranking North Korean official to visit the United States since 2000, when Jo Myong-rok, a vice marshal, visited Washington and met with then U.S. President Bill Clinton.

The two “talked about almost everything,” said Trump, when asked if they discussed U.S. troop levels in South Korea. They were also said to have discussed sanctions and formally ending the 1950-53 Korean War, which ended with an armistice agreement. They did not discuss North Korea’s human rights situation.

“We’re not going to go in and sign something on June 12, and we never were,” Trump said, acknowledging that a denuclearization deal may take some time to iron out. “We’re going to start a process.”

He continued, “And I told them today: ‘Take your time. We can go fast. We can go slowly.’ But I think they’d like to see something happen. And if we can work that out, that will be good. But the process will begin on June 12 in Singapore.”

There could be follow-up summits with the North, he pointed out, adding, “You’re going to have, probably, others.”

Trump, when asked if he believes Kim Jong-un is committed to denuclearization, replied, “I do think so. He’d like to see it happen. He wants to be careful.”

While the United States has power sanctions in place, Trump said, “At a certain point… I look forward to the day when I can take the sanctions off of North Korea.”

“I don’t even want to use the term ‘maximum pressure’ anymore,” said Trump on his administration’s policy of strong economic sanctions on the North to bring it to the dialogue table. “You see the relationship. We’re getting along.”

He said that the relationship right now with North Korea “is as good as it’s been in a long time.”

On whether the United States plans to offer North Korea economic aid at the June 12 summit, Trump said he expects South Korea, China and Japan to eventually help out.

Trump also said he “didn’t like” Kim Jong-un’s meeting with Russian Foreign Minister Sergey Lavrov in Pyongyang Thursday. He asked, “What’s the purpose of that?” But, he added, it “could be a positive meeting.”

When asked if a brighter future can be promised to North Korea with the Kim Jong-un regime in place, Trump replied, “I really think you can…They’re incredible people. I think it’s going to be a very great success.”