The Pittsburgh Pirates’ Korean infielder, Kang Jung-ho, hit a grand slam in his second minor-league game since returning to the United States as he works his way back to the major league. 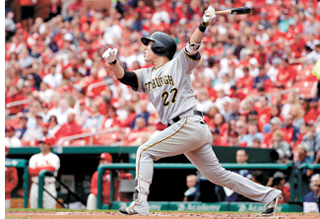 Kang Jung-ho of the Pittsburgh Pirates watches his home run against the St. Louis Cardinals on Oct. 1, 2016. [AP/YONHAP]

Starting at shortstop and batting third for the Pirates’ Advanced Single-A team, the Bradenton Marauders, Kang launched a grand slam in the bottom fifth against the Charlotte Stone Crabs at Lecom Park in Bradenton, Florida, on Saturday. The Marauders went on to win 7-6.

Kang’s blast broke a 1-1 tie, and the Marauders ended up scoring five runs in that inning. The Stone Crabs responded with five runs of their own in the top sixth, but the Marauders walked off on the visitors with Hunter Owen’s RBI double in the bottom ninth.

With those four RBIs from his slam, Kang went 2-for-4 and drew a walk. It was Kang’s second game in Single-A since being granted a U.S. visa in April. He missed the entire 2017 season and the beginning of the current season following legal trouble in Seoul.

In December 2016, Kang was arrested and charged with fleeing the scene of an accident after driving under the influence of alcohol in Seoul. It was his third DUI arrest in Korea, and he received an eight-month jail term, suspended for two years, in March 2017. He lost his appeal two months later.

Although he avoided prison time, Kang was denied a work permit after his arrest and could not enter the United States to play for the Pirates. In March 2017, the club placed him on a restricted list, where he remains. Kang hasn’t received any pay or earned major-league time since the move.

The former Korea Baseball Organization All-Star finally got his break in April when his work permit was issued. He reported to the Pirates’ spring training facility in Bradenton soon afterward, with hopes of rejoining the Pirates this season.

The Pirates are in fourth place in the National League Central 30-28, exactly six and a half games behind the leader, the Milwaukee Brewers. Rookie Colin Moran has been their primary third baseman, and the 25-year-old has acquitted himself well with a .277 batting average, five homers and 25 RBIs in 51 games.

The grand slam was Kang’s first home run in an official game since October 2016.

Kang finished third in the National League Rookie of the Year vote in 2015 after batting .287 with 15 home runs and 58 RBIs in 126 games. The following year, the Korean had 21 homers and 62 RBIs, along with a .255 batting average in 103 games. He is the first position player to jump from the KBO to MLB.

Choi Ji-man of the Milwaukee Brewers once again returned to the big-league lineup but had a hitless game against the Chicago White Sox at Guaranteed Rate Field in Chicago on Saturday. The Brewers won the game 5-0.

The Brewers called up Choi the previous day and were likely to use him as a designated hitter and pinch hitter against right-handers during their inter-league road trip.

After facing the White Sox for another game Sunday, the Brewers will visit the Cleveland Indians on Tuesday and Wednesday.

This is Choi’s third stint with the Brewers this season. He made the team’s opening day roster, but was optioned to Triple-A after just one game.

With injuries to first baseman/outfielder Ryan Braun in mid-May, Choi was brought up for a five-game stretch, where he went 3-for-14 with a home run and an RBI.

In his first game back this time, Choi grounded out back to the mound in the second, struck out in the fourth and flied out to center in the seventh. He went down swinging in the eighth inning.

The long-time minor leaguer was batting .302 with five homers and 23 RBIs in 40 games in Triple-A this season at the time of his most recent call-up. In the MLB, Choi is batting .211 (4-for-19) with one home run, one RBI and nine strikeouts.