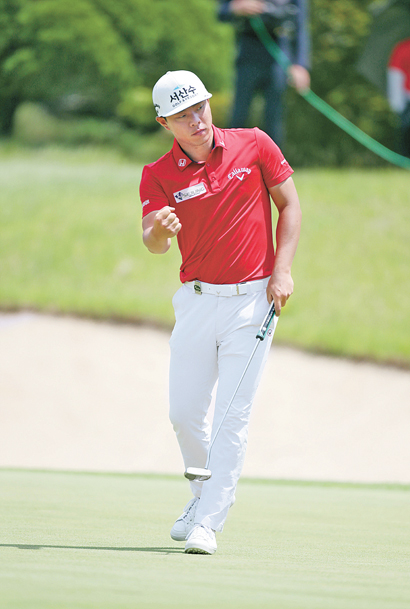 Maeng Dong-seop celebrates after making a birdie during the final round of the KB Financial Group LiiV Championship on Sunday. [NEWS1] 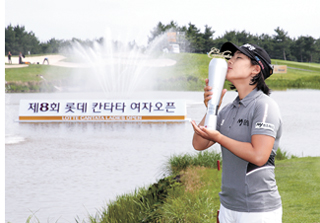 Starting the final round one shot behind the leader, Yun Sung-ho, Maeng quickly took the lead with birdies on the par-5 first and par-4 fourth holes. In the back nine, Hong Soon-sang, who started the final round at tied for fourth, slowly made his way up for a shared lead on the par-4 14th.

Although Hong dropped a spot with bogeys on the par-5 15th and par-4 17th, an eagle on the last hole was good enough for Hong to take the sole lead. It didn’t last long. Maeng, who played a group behind Hong, finished his round with back-to-back birdies.

“When I heard that Soon-sang made an eagle, I played more aggressively,” Maeng said after the round. “After I hit the green on two [on the last hole], I knew that I would win.”

With four birdies and a bogey in the final round, Maeng finished the tournament at nine under par. It was his first victory since the Dongbu Insurance Promi Open in April 2017 and third since his KPGA Tour debut in 2009.

The KPGA Tour will continue at the Descente Korea Munsingwear Matchplay, which runs from June 7 to 10, at South Cape Owners Club in Namhae County, South Gyeonggi.

Meanwhile on the KLPGA Tour, Cho Jeong-min had a wire-to-wire victory at the Lotte Cantata Women’s Open with a total score of 23 under par at the Lotte Sky Hill Jeju Country Club in Seogwipo, Jeju Island, on Sunday.

Although Cho allowed Choi Min-kyung a shared lead at one point during the final round, Cho easily extended her lead with four straight birdies from the par-4 13th to par-4 16th.

“Since I expected Min-kyung to get close, I waited until the back nine,” Cho said. “The consecutive birdies helped my momentum.”

Cho won the prize money of 120 million won as well as an exemption on the LPGA Tour’s Lotte Championship next year. She also set a new 54-hole record on the KLPGA Tour. The previous record was set by Bae Seon-woo, who shot 20 under par during the 2016 E1 Charity Open.

Aside from the 54-hole record, Cho also set a 36-hole record on the KLPGA Tour with a score of 17 under par, and she set a course record during the second round with 10 under par.

Choi finished runner-up at 17 under par.

The KLPGA Tour will continue at the S-Oil Championship, which runs from June 8 to 10 at Elysian Jeju Country Club.