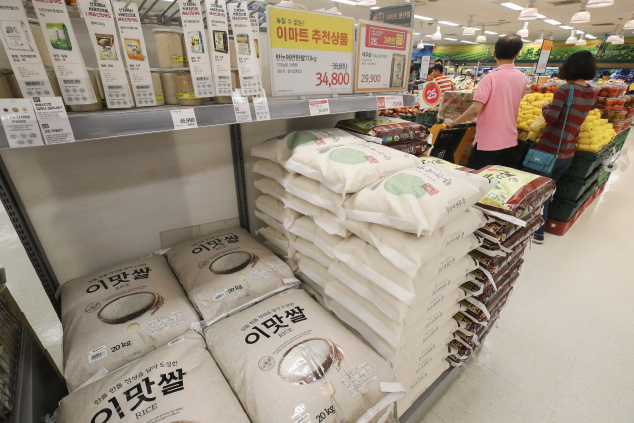 An increase in rice prices is prompting hikes in household food budgets as seen in the rice section of the Yongsan E-Mart in central Seoul on Sunday. Costlier farm products have been pushing up processed food prices as well. [YONHAP]

The rise in agricultural prices is starting to spill over to processed food.

Seven different packaged breads from SPC Samlip including one containing sweet adzuki beans and cream sold at supermarkets and convenience stores saw prices rise an average of 10.2 percent on May 7.

The price spikes in processed food came after agricultural products picked up last month. Vegetable prices shot up by an average of 9.53 percent last week from a week earlier, according to data from the Korea Consumer Agency. Potatoes in particular cost 59.1 percent more than a week before. Rice saw a week-on-week price increase of 29.5 percent.

As prices of rice and potatoes went up, Korea posted the 10th-largest on-month increase in food prices in April - at 2.9 percent - among Organization of Economic Cooperation and Development member states, according to Statistics Korea Sunday. Korea fell to as low as 30th in terms of on-month food price increases in January and made a comeback to the 10th rank.

In April, potato prices skyrocketed 76.9 percent from a month earlier. It was the biggest month-on-month gain since March 2004, which saw an 85.8 percent increase.

The effect lasted through May. Costlier agricultural prices led the consumer price index to climb 1.5 percent year on year, said Statistics Korea on Friday. That is a slight deceleration from the previous month’s 1.6 percent year-on-year gain.

The government’s statistics office said prices of rice need to be closely monitored. Rice prices had been on a downward spiral since February 2014 but began rebounding last October, posting an 8.5 percent month-on-month increase.

“Rice will be a determinant factor in whether food prices will continue rising or not,” said a Statistics Korea official. “Supply isn’t keeping up with demand now.”

Preceding the increase in prices of processed food was a rise in the prices of beverages, snacks and instant rice from a range of different producers such as CJ, Haitai, Crown, Lotte and Coca Cola from the beginning of this year.