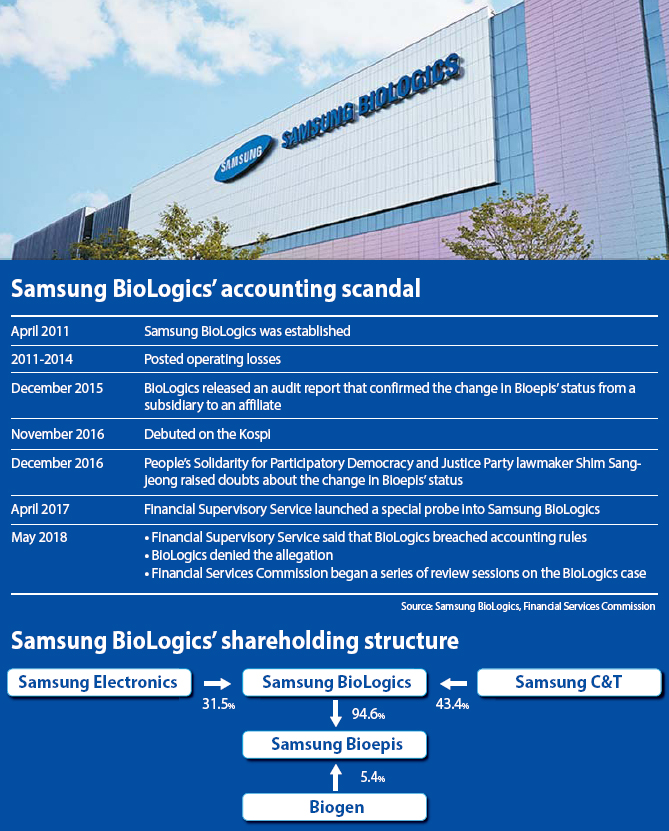 Back in 2016, Samsung BioLogics was the hottest initial public offering of the year when it debuted on the main bourse.

By April of this year, the biopharmaceutical arm of the Samsung empire had climbed to become the third most valuable company on the Kospi.

The hype around BioLogics, however, quickly turned sour after the Financial Supervisory Service (FSS), the country’s financial watchdog, accused the company of violating accounting rules to inflate its valuation ahead of its listing in 2016.

BioLogics received a statement from the FSS on May 1 that said that the charge of accounting fraud was a preliminary result of a special probe. The result could change after Korea’s top regulatory agency, the Financial Services Commission (FSC), reviews the ruling.

The FSC held a series of meetings on BioLogics, but the agency’s members are divided and it hasn’t yet reached a conclusion. This story will delve into what’s at stake in the case and the fallout from the controversy.

Q. What is Samsung BioLogics?

The biopharmaceutical arm of Samsung was established in April 2011 as a joint venture between Samsung subsidiaries and Quintiles Transnational, an American multinational firm that is now called Iqvia. It was a strategic move by Samsung, which decided that the biopharmaceutical industry would be a key pillar of its future growth.

In the first quarter of last year, for the first time in its six-year history, BioLogics posted a quarterly operating profit.

It took nearly decade for other global contract biopharmaceutical manufacturers to turn their first profit.

The company was listed on the main bourse in November 2016, and less than two years later, it leapt to the No. 3 spot on the Kospi in terms of market capitalization. It emerged as the most valuable Korean bio-related company, and its shares reached a high of 600,000 won ($558).

But on May 2, a day after the FSS said Samsung BioLogics violated accounting rules, its shares tumbled 17.21 percent to 404,000 won, and its market capitalization fell by as much as 6 trillion won.

Q. Where, exactly, do Samsung BioLogics and the FSS’ interpretations of the case clash?

The watchdog and Samsung BioLogics are at odds over whether BioLogics’ decision to change the status of Samsung Bioepis was legal.

BioLogics says that it switched Bioepis’ status at the end of 2015 because Bioepis’ strong performance raised the possibility of Biogen, an American biotech firm, exercising its call option right to raise its stake in Bioepis.

If Biogen uses the right, it could raise its share in Bioepis to 49.9 percent. In that case, Bioepis’ status as a BioLogics subsidiary would be inappropriate, because BioLogics would not hold absolute power over Bioepis, according to BioLogics.

The FSS, however, sees the switch as a maneuver from BioLogics to bloat its valuation. This is because the move allowed the company to use a different accounting standard which factored in the market value, not book value, of Bioepis.

Q. Why does the distinction between subsidiary and affiliate matter so much?

When a company shifts from a subsidiary to an affiliate, it can adopt a different accounting standard for the related company. BioLogics changed the accounting standards applied to Bioepis to use market value, instead of book value, as it had done previously.

The pharmaceutical company suffered operating losses for four straight years but managed to record a net profit of 1.9 trillion won in 2015.

Critics believe the upbeat performance was helped by the new accounting standard, as Bioepis was valued at 4.8 trillion won by the market, switching the losses to gains.

Q. What is a call option? Why is Biogen's exercise of its call option crucial?

A call option is a right given to a stakeholder to buy an agreed quantity of stocks or assets before a particular date. In the joint venture deal on Bioepis, Biogen holds the call option.

Biogen will likely be more tempted to use its right to expand its stake when Bioepis’ business is doing well. Whether Biogen intended to use its right in 2015 is critical, because Samsung BioLogics says Biogen’s intention to use the call option was the reason behind its decision to convert Bioepis into an affiliate.

BioLogics says that Biogen was willing to use the call option in 2015, as Bioepis was on track to receive approval for its drugs in Europe. The FSS, however, maintains that there is no evidence that Biogen intended to use its right back in 2015.

Q. Why did the FSS start investigating Samsung BioLogics’ accounting?

The civic organization People's Solidarity for Participatory Democracy and the minority opposition Justice Party leader Sim Sang-jung called for an investigation at the end of 2016, which prompted the FSS to launch a special audit in April 2017.

But little was announced about the investigation until May 1, when the FSS announced its preliminary results. The watchdog said that its audit team concluded that BioLogics violated accounting laws by deliberately switching the status of Bioepis from a subsidiary into an affiliate in order to inflate its valuation.

Q. How did the People's Solidarity for Participatory Democracy get involved in Samsung BioLogics’ accounting?

The civic group and Sim claimed that Samsung deliberately inflated the value of Samsung BioLogics to facilitate the merger in September 2015 of Samsung C&T, the chaebol’s de facto holding company, and Cheil Industries, Samsung’s fashion and chemical unit.

They claimed that the merger was supposed to help Samsung Electronics Vice Chairman Lee Jae-yong, the son of bedridden Samsung Chairman Lee Kun-hee, gain firm control of the country’s most valuable business empire.

Sim and the civic group said that BioLogics’ growth potential assessment from an international advisory firm, which valued the company at 1.5 trillion won, was evidence of accounting fraud.

Q. What is the shareholding structure of Samsung BioLogics like?

Samsung C&T is the top shareholder in BioLogics, with a 43.4 percent share, followed by Samsung Electronics with 31.5 percent and Samsung Life Insurance at 0.09 percent. Foreign investors account for 9.91 percent of shares, while other investors own the remaining 15.07 percent.

Q. What is Samsung Bioepis?

Biosimilars refer to biological drugs that have no clinically meaningful differences related to safety, purity and potency to the original drug.

Even though there are minor differences in clinically inactive components, these copycat versions of biological drugs sourced from living cells are cheaper. Bioepis currently focuses on drugs for immunology, oncology and metabolic diseases.

Q. What makes the accounting problem such a big issue?

BioLogics’ accounting has both economic and political impact. The controversy surrounding Samsung BioLogics could affect investors of the company, which is currently one of the top 10 companies on the Kospi.

If BioLogics is charged with accounting fraud, it could be delisted from the Kospi in a worst-case scenario. This could deal a major blow to Korea’s main bourse and capital markets in general.

On the political front, if the allegation is true, the investigation could widen to include the heads of the financial authorities and the Korea Exchange to see if they covered up the attempt to inflate BioLogics valuation.

Since the case includes a major Samsung affiliate and took place under the previous Park Geun-hye administration, it could be linked to the massive influence peddling scandal that involved the former president, her confidante Choi Soon-sil and several business leaders, including Samsung heir-apparent Lee Jae-yong.

Q. Before the Samsung BioLogics scandal broke, the FSS launched an inspection earlier this year into Korean biopharmaceutical and pharmaceutical firms’ research and development accounting. The FSS found that more than half of the companies classified their R&D spending as assets. Where does that practice come from, and why is it problematic?

R&D spending is normally classified as an expense when it comes to accounting at global biopharmaceutical firms. But a sizable portion of Korean bio companies classify that budget in the “intangible assets” category on their balance sheet.

This practice can increase bio companies’ operating profit, though the accounting community generally agrees that R&D costs can only be categorized as assets if the R&D expenses can deliver definite returns.

Foreign institutional investors have pointed out that Korean bio companies tend to post excessive operating profits due to this accounting trick. If their result does not come out as predicted, the asset instantly turns into a loss, dealing a blow to investors.

Q. What will be the future of Samsung BioLogics?

It's too early to predict the fate of BioLogics, because the top regulatory agency has yet to decide on the FSS ruling. Should the FSC rule in favor of the FSS, then the Korea Exchange, the operator of the country’s trading boards, could open a session to see if the listing was legal.

The most severe penalty would be delisting BioLogics from the Kospi, though delistings are uncommon.

The most likely punishment is a fine. If BioLogics is found not guilty of violating the law, the FSS could face a class action from investors for causing losses.