Mattis sees a ‘bumpy road’ ahead

Mattis sees a ‘bumpy road’ ahead 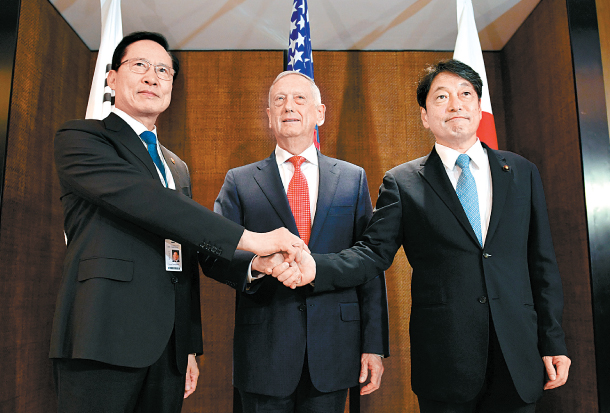 SINGAPORE - U.S. Secretary of Defense Jim Mattis said North Korea will not receive any sanctions relief until it demonstrates “verifiable and irreversible steps” to denuclearize, adding that Washington anticipated a “bumpy road” leading up to the June 12 summit with Pyongyang as both countries iron out details for their first bilateral leaders’ meeting.

“We must remain vigilant, and we will continue to implement all UN Security Council resolutions on North Korea,” Mattis said during a trilateral defense ministers’ meeting between South Korea and Japan Sunday on the sidelines of the Shangri-La Dialogue, an annual security summit held in Singapore. “North Korea will receive relief only when it demonstrates verifiable and irreversible steps to denuclearization.”

The remarks were made after U.S. President Donald Trump said Friday in Washington, following a meeting with a special envoy from North Korea, that the United States would put on hold “hundreds of new sanctions” that were ready to be levied on the regime as long as bilateral dialogue continues. “We had hundreds of new sanctions to go on” North Korea, said Trump. “But I said I’m not going to put them on until such time as the talks break down. We have very significant sanctions on now … But why would I do that when we’re talking so nicely?”

In a joint statement that followed the meeting between Mattis, South Korean Defense Minister Song Young-moo and Japanese Defense Minister Itsunori Onodera, the three countries said they “welcomed” the Panmunjom Declaration signed on April 27 at the South-North summit, and that the three countries believed it had positive ramifications on the upcoming U.S.-North summit. The declaration, signed between South Korean President Moon Jae-in and North Korean leader Kim Jong-un, confirmed both leaders’ “common goal of realizing, through complete denuclearization, a nuclear-free Korean Peninsula.”

An official at South Korea’s Defense Ministry said Mattis and Song agreed to hold bilateral military exercises as initially planned, regardless of ongoing talks with North Korea, but to keep the drills as “low key” as possible in order not to provoke the regime. Pyongyang usually sees them as a rehearsal for invading its country to overthrow the leadership. Last month, the North pulled out of a planned high-level meeting between South Korea just hours before it was to take place, criticizing a joint air drill between the South and the United States.

The high-level meeting was held only after Moon met Kim in an unannounced summit on May 26.