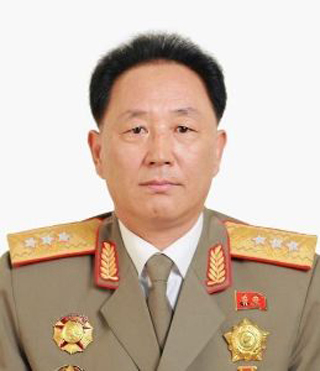 North Korea replaced its defense minister last month, the latest in a series of military changes as leader Kim Jong-un expresses his willingness to denuclearize the Korean Peninsula.

No Kwang-chol, who previously served as first vice minister of the North’s People’s Armed Forces, was promoted to minister last month during a meeting of the Central Military Commission under the ruling Workers’ Party, which Kim presided over on May 17, according to a local intelligence source who spoke on the condition of anonymity.

The source said South Korean intelligence authorities don’t know yet about the whereabouts of Pak Yong-sik, No’s predecessor who was a part of Kim’s entourage to the first South-North summit this year on April 27.

North Korea hasn’t confirmed the reshuffle yet. A day after the military meeting, the state-run Korean Central News Agency reported that military officials “discussed and decided on a series of organizational measures to further strengthen” the army, but did not specify what those measures were.

The South Korean intelligence official said local authorities were also informed by an unidentified source that the North has replaced its chief of the Korean People’s Army’s General Staff, but did not know who got the job. Ri Myong-su was the last known figure to hold the post, and he was part of Kim’s delegation in the April 27 inter-Korean summit as well.

If the North has replaced its defense minister and chief of the Korean People’s Army’s General Staff, it would signify changes to three major military posts in less than two months, an unprecedented move.

The other major military post that the regime recently reshuffled is director of the military’s General Political Bureau. That position was filled by Kim Jong-gak from January until last month, when North Korean media announced Kim Su-gil, former chairman of the Pyongyang City Committee of the Workers’ Party, as its new director.

The local intelligence source said local authorities have yet to figure out where Kim Jong-gak and Ri Myong-su are currently as well.

Local pundits believe Ri, former chief of the Korean People’s Army’s General Staff, may have been severely punished after he was caught on North Korean cameras dozing off during a Central Committee meeting on May 20, which was aired on the North’s national television. Jo Yon-jun, chairman of the Central Committee’s Inspection Commission, was seen staring at Ri from a seat behind him. South Korean intelligence authority believes Hyon Yong-chol, a former defense minister, was executed in 2015 for falling asleep during a meeting presided over by leader Kim Jong-un.

Jung Chang-hyun, a North Korea expert who heads a modern history research institute, said that the Central Military Commission meeting Kim Jong-un presided over on May 17 must have touched on military policies and strategies that would be implemented once U.S.-North relations improve. In light of this, Jung said that the latest personnel reforms in North Korea’s military could be part of Kim’s effort to prepare for a change in direction.