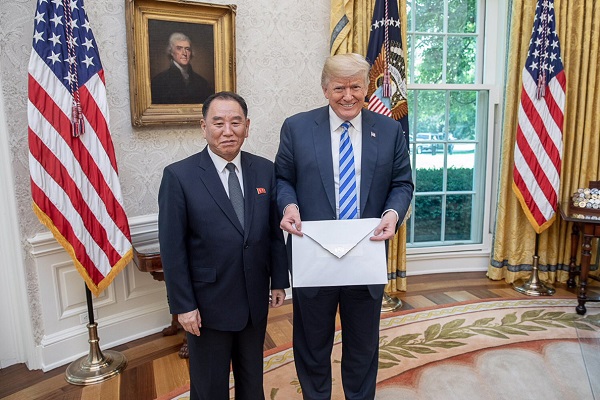 The Korean War broke out when the Soviet-backed North Korean army invaded an ill-prepared South Korea on the night of June 25, 1950.

Three years of fighting devastated the peninsula and failed to end the division set in place by the Soviets and Western nations at the end of World War II.

“We talked about ending the war,” Trump said on the south lawn after Kim Yong-chol left the White House. “And you know, this war has been going on — it’s got to be the longest war — almost 70 years, right? And there is a possibility of something like that.

“Can you believe that we’re talking about the ending of the Korean War?” he continued.

But replacing the armistice with a peace treaty will require the participation of the three signatories of the 1953 armistice: the U.S.-led United Nations Command on behalf of South Korea and the North Korean and Chinese militaries.

Therefore, it needs consent from Beijing.

In November 1950, the North stood on the brink of being defeated by the U.S.-led UN Command and Chinese leader Mao Zedong sent hundreds of thousands of Chinese soldiers across the border to drive the UN forces south.

More than 100,000 Chinese were killed in the conflict, including Mao’s son, and the two Communist allies often say their alliance was “forged in blood.”

On early Saturday, Trump announced that the June 12 summit, which he abruptly called off on May 25, was officially back on track, stressing North Korea was pursuing denuclearization.

On the crucial role the United States bears in the denuclearization process, he said, “Without us, it wouldn’t happen.”

Wrapping up a four-day stay in the United States, Kim Yong-chol left for Beijing early Sunday en route to Pyongyang.

During his stay, he had two meetings with U.S. Secretary of State Mike Pompeo in New York and had an 80-minute meeting with Trump at the Oval House during which he delivered a letter from Kim Jong-un to Trump. Contents of the letter have not been released.

Kim Yong-chol, a four-star general, formerly ran the People’s Army’s Reconnaissance General Bureau, the main intelligence agency, and is the alleged mastermind of the 2010 torpedoing of the South Korean Cheonan warship, which killed 46 sailors.

He has been the target of U.S. Treasury sanctions since 2010 and has traveled to the United States on a special waiver from the State Department.

A team of American negotiators led by Sung Kim, the U.S. ambassador to the Philippines and former envoy in nuclear talks, had a third round of talks with a North Korean delegation led by Vice Foreign Minister Choe Son-hui on Saturday on the northern side of Panmunjom, three days after their second round of talks at the same venue.

It remains to be seen whether the two sides will have additional talks on the upcoming summit this week.