Putting a new life together : Piece by piece, Agnes learns how to put herself first in the film ‘Puzzle’

Putting a new life together : Piece by piece, Agnes learns how to put herself first in the film ‘Puzzle’ 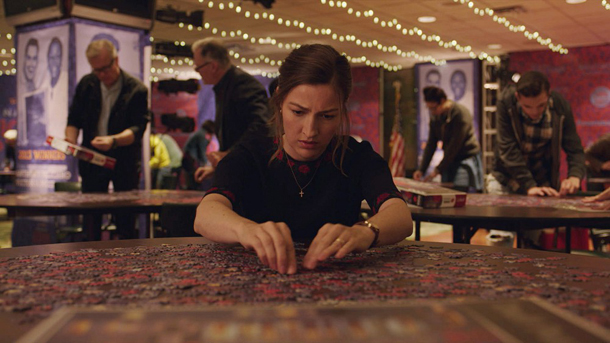 In “Puzzle,” Kelly Macdonald plays a selfless middle-aged housewife, who learns to take control of her own life after learning that she has a talent for assembling jigsaw puzzles. [SEOUL INTERNATIONAL WOMEN’S FILM FESTIVAL ]

The Seoul International Women’s Film Festival (Siwff) is a feast for cineastes craving female-centered movies - something still rare in the mainstream film industry.

“Puzzle,” which screened under the New Currents section at the ongoing 20th edition of Siwff, is a charming and easygoing drama about a middle-aged woman who learns to be herself and gains the courage to do what she wants after discovering her talent for putting together jigsaw puzzles.

The second feature coming from producer-turned-filmmaker Marc Turtletaub, best known for producing “Miss Little Sunshine” (2006), the movie centers around the reserved and selfless Agnes (Kelly Macdonald), who lives her life as a dutiful housewife and a caring mother of two grown-up sons.

Her husband Louie (David Denman) is a decent man. But as a hard working man from the working class, he expects his wife to be fully devoted to the roles that society typically defines for women - cooking, cleaning and handling all household chores.

Louie adores his wife, but his love does not extend far enough for him to put himself in her shoes. When her aunt asks how she feels, Agnes can’t believe what she hears, wondering whether the question is really for her.

Despite all the time and energy she spends on her family, Agnes replies, “I don’t do anything.”

Agnes’ selflessness is clearly demonstrated from the beginning. She readies her home for a party, vacuuming a room and straightening a tablecloth. Once the guests arrive, she brings out food and occasionally checks in on her husband to make sure that he is enjoying himself. Near the end of the party, she carries out a huge chocolate cake, which she probably baked herself, from the kitchen to the living room, and everyone suddenly breaks into song, wishing Agnes a happy birthday.

Though she does not complain about her life, the scene that comes after the party demonstrates a sense of emptiness that overwhelms her: Agnes sips a glass of wine alone in the kitchen, tapping her fingers and looking around as if searching for a missing piece of life.

Agnes finally fills this emptiness with puzzles, or more precisely, through her puzzle partner Robert (Irrfan Khan), who inspires her to realize what she wants in life.

Agnes is introduced to puzzles through a birthday gift. Assembling a 1,000-piece jigsaw puzzle without much difficulty, she hops on a train to Lower Manhattan to buy herself more puzzles. There, she sees a sign that reads, “A puzzle champion is seeking a partner for competitions.” Agnes hesitantly texts the number written on a tear-off strip and ends up meeting Robert.

Though the budding romance between the protagonists is quite predictable, the movie goes beyond a simple romance. By spending time together with Robert, Agnes, who always sought for permission to pursue her own pleasure, learns to speak her mind and to do what she feels like.

Putting the affair aside, the movie eventually returns its focus on Agnes’ life.

The film ends with Agnes finally heading to Montreal, a place she has long dreamed about - a perfect ending to the life-searching journey of a middle-aged woman who finally learns to prioritize her life before that of others.