Pyongyang’s grand architectural statements : North Korea’s iconic buildings offer insight into how the hermit kingdom sees itself and its future

Pyongyang’s grand architectural statements : North Korea’s iconic buildings offer insight into how the hermit kingdom sees itself and its future

Statement No. 1: Every high-rise in Jongno District in central Seoul or Gangnam District in southern Seoul are residential buildings.

Statement No. 2: There are no commercial facilities around Gwanghwamun in central Seoul.

The answers to these questions are all false. But if you substitute Seoul with Pyongyang, both statements would be true. All high rises in Pyongyang are apartments, and only public cultural facilities can be built around Kim Il Sung Square, located in the heart of Pyongyang. It’s a matter of course for most cities across the globe to establish buildings on expensive land to maximize profit.

However, there’s no land value in the North because it is a socialist country that doesn’t acknowledge private property ownership. According to the land law of North Korea, “Land in Democratic People’s Republic of Korea is owned by the country and a cooperative group. The people have joint ownership of all of the land in this country and no one can sell, purchase or individually own it.”

This ideology is the first step to understanding North Korean architecture 101. As there’s no privatization of land in North Korea, buildings don’t get built according to the principles of a market. They are established as monuments to the country’s socialist ideologies. Socialist theorists viewed metropolitan cities that intensify the gap between the rich and poor as evil. For them, a city should be planned and controlled. It is a canvas for them to propagate socialist ideology.

The DNA of the architecture found in the former Soviet Union is deeply rooted in North Korea. Architect Kim Jung-hee, who took the helm in reconstructing Pyongyang following the Korean War (1950-53), was an alumnus of the Moscow Architectural Institute. Gradually, however, the unprecedented three-generation heredity system that’s been handed down from Kim Il Sung to Kim Jong-il to now Kim Jong-un, has turned Pyongyang into a canvas to display their power. That is because, according to experts, the focus in recent years, has been on propagating the North’s Juche Ideology (North Korea’s ideology on political, economic and military self-reliance) to idolize the leader, rather than to propagate socialism. For a basic introduction to North Korean architecture, it is inevitable to focus on Pyongyang, as it has been specially managed since the North’s establishment. 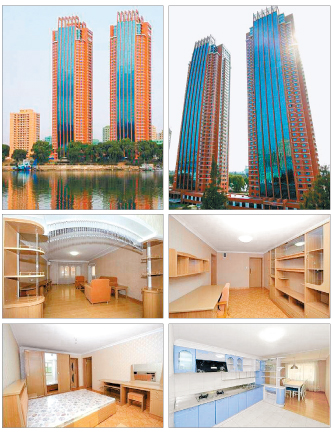 Apartments for professors at Kim Chaek University of Technology in Pyongyang. The 46-story high-rise apartment looks down on the Taedong River and its interior are similar to modern South Korean apartments. [JOONGANG PHOTO]

Showing off with a triumphal arch

Kim Il Sung’s architecture style differs before and after the Korean War. According to professor Jung In-ha from the division of architecture at Hanyang University, Kim “was greatly influenced by the Stalin before the war, so he stressed the city’s monumentality using classical architecture style.”

“But after the war, in order to restore the city, he was influenced by Khrushchev and focused on supplying standardized, prefabricated houses in large quantities,” Jung said.

After the late ’70s, Kim Jong-il began to appear more frequently in public. He was known to be quite interested in architecture. It was Kim Jong-il who emphasized the artistic value of architecture, and many of the buildings established during his rule were more focused on being aesthetically pleasing. During the course of hereditary succession, the North’s architecture became a tool to display the Kims’ supremacy.

Competing with size is one example. In time for Kim Il Sung’s 70th birthday, a triumphal arch was constructed in 1982. It is 60 meters (197 feet) in height, intentionally constructed to be larger than the Arc de Triomphe in Paris, which stands at 49 meters. It used 15,000 granite stones to build the arch, weighing a total of 18,000 tons. North Korea boasts it as the heaviest triumphal arch in the world. What is unique is the shape of the arch. On four foundation stones, four pillars are erected and a three-story roof was placed on top.

According to professor Jung, “It’s similar to the architecture style of Soviet Union, which agonized how socialism can combine different traditions.”

It was during this time that concrete buildings that look like hanok (traditional Korean house) were built throughout Pyongyang. The Grand People’s Study House, which is the central library in Pyongyang’s Kim Il-sung Square, is one of them. It was established in 1982. The grand building is 190.4 meters long, 150.8 meters wide and 10 stories high. The same year, two concrete hanok style buildings - the Blue House and the National Folk Museum of Korea in central Seoul - were established in South Korea. Experts say that the North and South were “competing with keeping traditions.”

After the start of Kim Jong-un’s reign, high-rise buildings began to sprout here and there in Pyongyang. Similar to his grandfather’s Chollima Movement - the North’s answer to China’s Great Leap Forward, which translates into English as the “Excellent Horse Movement” - he is accelerating to propagate his power and the North’s system.

Soon after establishing Mirae Scientists Street, where a 53-story skyscraper was built, Ryomyong Street was built. The groundbreaking ceremony for the Ryomyong New Town was on April 3, 2016, and it was completed a year later on April 13 of last year. On a vast 900,000-square-meter (222-acre) land, 44 condominiums that are more than 70 stories high, six schools and three kindergartens were built there within a year.

From left: The Grand People’s Study House, the central library in Pyongyang’s Kim Il Sung Square; the triumphal arch was constructed in 1982 and intentionally built to be bigger than the Arc de Triomphe in Paris; and the classically designed Moranbong Theater in Pyongyang. [JOONGANG PHOTO]

According to a report by Land & Housing Institute on the Ryomyong New Town, about eight million workers had been deployed to complete the project in time, and it’s the result of working 24 hours non-stop by 30,000 workers a day.

Besides from such large-scale development projects, apartment buildings that are about 10 to 15 stories high have been reconstructed by tearing down old houses on the inner streets of Pyongyang during Kim Jong-un’s leadership.

“During Kim Jong-il’s time, residential areas were developed in the suburbs far from the Kim Il Sung Square,” said professor Yim Dong-woo of architecture in urban design at Hongik University. “But these days, reconstruction is taking place in the streets near the square.”

The design of the recently built houses in Pyongyang are quite different than before. They are similar to South Korean apartments. Experts predict that Pyongyang will make similar transition as other Eastern Europe cities underwent, where residential buildings and public facilities become privatized and commercialized.

“As for urban architecture, it takes a relatively long time compared to other areas, but we should accumulate knowledge about architecture in North Korea through active exchanges and build a foundation that starts from understanding,” said architect Hwang Doo-jin, who is responsible for exchanges between the South and North at the Korean Institute of Architects. “I hope we start considering what other housing methods can be established in the Korean Peninsula at this point by understanding more about how architecture has developed in the North.”