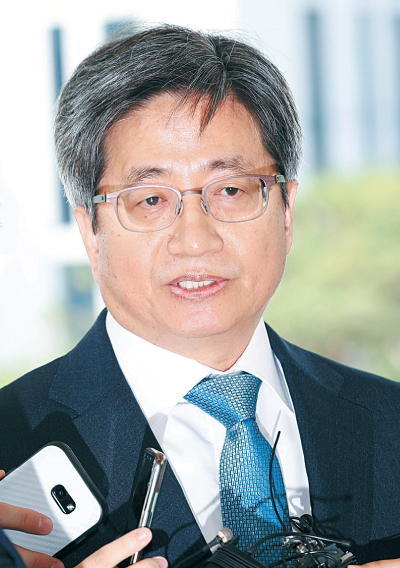 Supreme Court Chief Justice Kim Myeong-su speaks to reporters on his way to work on Monday. His predecessor has been accused of abusing his power to curry favor with the previous government. [YONHAP]

Lower court judges in Seoul called for a thorough investigation on Monday into allegations that a former Supreme Court chief justice used his power to meddle in decisions and curry favor with the previous administration.

“We seek a thorough and fair investigation into the power abuse allegations,” read a statement issued by judges in the Seoul Central District Court on Monday. “It is deeply concerning that the people have lost faith in the judiciary through these allegations.”

A group of judges at the Seoul Family Court issued a similar statement on Monday calling for an investigation.

Judges in courts around the country have been holding internal meetings on whether to seek criminal charges against Yang Sung-tae, former Supreme Court chief justice, and other judges involved in his alleged meddling. The Supreme Court’s current chief justice Kim Myeong-su, who was appointed last September, said he would make a decision after hearing from judges.

Yang, who served under disgraced President Park Geun-hye, faces a litany of accusations, including influencing decisions at the Supreme Court and creating a blacklist of judges based on their political and ideological leanings. Most notably, he is suspected of deliberately using politically sensitive trials as bargaining chips to curry favor with the Park administration.

A civic committee on reforming the judicial branch is meeting with Kim today. The heads of local courts in Korea are meeting on Thursday, and a national committee of judges plans to convene on June 11.

The flurry of activity began after an internal investigation unearthed documents from computers of the National Court Administration, the Supreme Court’s administrative body. They included directives hinting at coordination between the court and Park administration.

“Regarding cases that may have strong national or societal influences, or are about sensitive political issues,” one directive read, “communicate with the Blue House unofficially, and in advance, to make sure that the Supreme Court does not dole out unexpected rulings.”

The documents also included decisions on 16 cases, including one remanding a lower court ruling to restore the employment status of fired workers at Korail, the nation’s rail operator. Among the 16 rulings, six were made en banc, meaning the cases were heard by the entire bench at the Supreme Court.

The scandal has huge political ramifications since collusion between the Supreme Court and the Blue House violates the principle of the separation of power between the executive and judiciary. Kim, the current chief justice, apologized on behalf of the court on Friday “for the shock and disappointment that people must have felt” about the scandal.

After the apology was issued, a number of Supreme Court justices complained to Kim that his apology jumped the gun and made it appear as if they did carry out decisions to curry favor with the Blue House, the justices exclusively told the JoongAng Ilbo.

“They objected to Kim mentioning the possibility of having the prosecution investigate the allegations,” a Supreme Court justice told the JoongAng Ilbo.

Kim told reporters on his way to work on Monday morning that there was no drastic disagreement on the bench regarding the allegations.

“I listened to some of the Supreme Court justices’ opinions,” Kim said. “I didn’t think there was disagreement.”