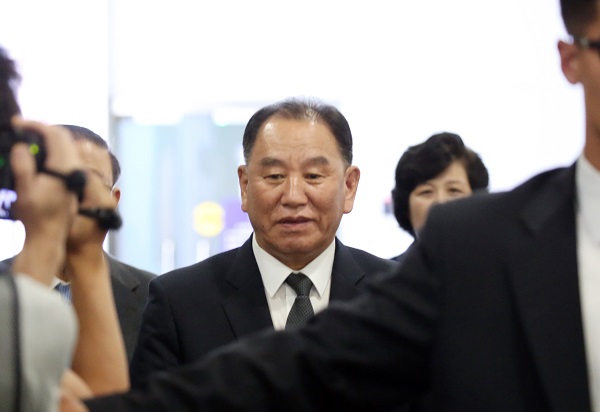 Ahead of an historic meeting with U.S. President Donald Trump on June 12 in Singapore, North Korean leader Kim Jong-un may be trying to meet with the presidents of Russia and China, according to various analysts.

On Friday, Kim Yong-chol, the vice chairman of the North’s ruling Workers’ Party Central Committee, held an 80-minute meeting with Trump at the White House and delivered a letter from Kim. Trump immediately announced that the summit was back on for June 12 in Singapore. The president also showed unusual politeness, seeing Kim Yong-chol, a former spy chief, off as he departed in a car.

Kim, also the director of the United Front Department, which is responsible for inter-Korean relations, flew into Beijing from New York on Sunday and departed Monday around noon. While in China, he may have reported to Beijing officials the results of his trip to the U.S., where he held meetings with Secretary of State Mike Pompeo in New York over Wednesday and Thursday before meeting with Trump on Friday.

Kim Jong-un has shown similar patterns in the past from refraining from public activities as he prepared for major summits.
Ahead of his summit with South Korean President Moon Jae-in on April 27 in Panmunjom, Kim made a surprise visit to China, his first visit outside of his country since he took power, from March 25 to 28. In Beijing, he had a summit with Chinese President Xi Jinping, rekindling dampened diplomatic relations between the two neighboring countries.

“North Korea is emphasizing that a small country like itself is facing the United States, and has requested support from China,” a former high-ranking government official said. “It is weighing whether to tighten its blood ties [with China] and enter the [U.S.] summit talks emboldened, or exercise restraint and appeasement.”

The JoongAng Ilbo reported last month that Xi promised Kim in their Dalian summit active support for North Korea even if the North-U.S. summit does not turn out well.
Last week, Russian Foreign Minister Sergey Lavrov visited Kim in Pyongyang, opening the possibility of a summit with Russian President Vladimir Putin.

Trump last month noted “a little change in attitude from Kim Jong-un” following his second summit with Chinese President Xi Jinping in Dalian at the beginning of May, saying he was a “little disappointed.”
Trump told reporters Friday on Lavrov’s meeting with Kim Jong-un, “I didn’t like the Russian meeting yesterday. I said, ‘What’s the purpose of that?’”

He continued, “If it’s a positive meeting, I love it. If it’s a negative meeting, I’m not happy.”
Chinese and Hong Kong media have reported that a summit between the leaders of the Russia, China and North Korea could take place as early as Saturday, just ahead of the Kim-Trump meeting.

Russian President Putin is scheduled for a three-day state visit to China to attend the Shanghai Cooperation Organization summit in Qingdao, a coastal city in Shandong Province, which takes place on June 9 and 10 and will be chaired by Xi.
There is also a chance Kim may have a bilateral summit with Putin.

A Seoul government source said, “Right after Foreign Minister Lavrov visited Pyongyang on May 31, North Korean media reported that the two sides agreed to a North-Russia summit. The two countries have not revealed a summit date, but depending on the situation, it could come before a summit with the United States.”

Lavrov held talks with North Korean Foreign Minister Ri Yong-ho in early May in Moscow, and his return visit Thursday, the first trip by a Russian foreign minister to Pyongyang in nine years, came in less than a month. Observers point out that this could indicate Putin’s interest in holding a summit with Kim and wishing to give some input on the situation on the Korean Peninsula.