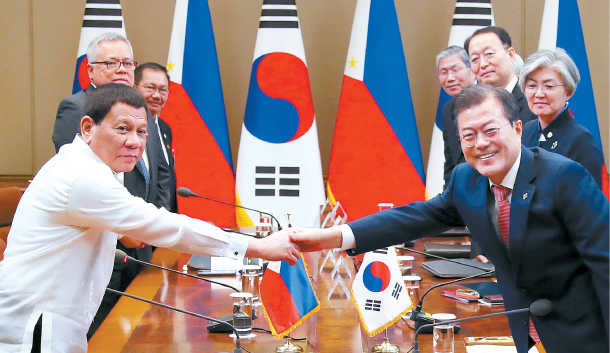 The presidents of South Korea and the Philippines agreed Monday during a summit at the Blue House to boost cooperation in the fields of transportation, economics and trade, renewable energy, technology and infrastructure.

Five memoranda of understanding were signed in those fields as the two leaders vowed to boost their friendship on the occasion of the 70th anniversary of the establishment of diplomatic ties next year.

Philippine President Rodrigo Duterte arrived in Korea on Sunday for a three-day visit, his first time in the country since assuming office in 2016. With that, Duterte became the first head of state from a member country of the Association of Southeast Asian Nations (Asean) to visit Korea since Moon took office in May 2017.

The Blue House said in a statement that the Philippine president praised Moon and the South Korean government for their roles in the recent flurry of diplomatic events on the Korean Peninsula, adding that he told Moon that the Philippines would support the government’s efforts.

During his meeting with Duterte, Moon was said to have pointed out that Korea was one of the Philippines’ five largest trading partners, with total trade of $14.3 billion last year, and that Koreans were the largest number of visitors to the Southeast Asian nation.

In commemoration of the 70th anniversary of diplomatic ties next year, Moon and Duterte agreed to designate 2019 as “The Year of Mutual Exchanges Between Korea and the Philippines,” during which both governments will cooperate to boost people-to-people exchanges.

In other fields, the two leaders agreed to closely cooperate on various global issues such as climate change, environment, marine security and cybersecurity. They also discussed the safety of Korean expats in the Philippines.

From 2017 to 2020, the Korean government agreed to give $6.6 million worth in support for Philippine police in areas that have many Korean residents, a budget that goes toward training officers and purchasing patrol cars.

Moon held a banquet for Duterte and his delegation in the evening. Around 70 people from various fields, including politics, business, academics and literature were invited.

Meanwhile on South Korean portal websites, Duterte was criticized for kissing a woman on stage Sunday during a meeting with the Filipino community in Seoul. According to the Manila-based Philippine Star, Duterte suggested he would give away a copy of a book entitled “Altar of Secrets: Sex, Politics, and Money in the Philippine Catholic Church” before ending his speech. In return, he asked the women in the audience for kisses as payment.

Duterte reportedly asked the audience not to take the kiss seriously, saying it was a “gimmick” to please the people. A short video attached to the online article showed two women from the crowd walking up the stage, one of whom kissed Duterte in the lips. The crowd roared and the woman was seen hugging him afterwards.