Sentosa may be venue for summit

Sentosa may be venue for summit 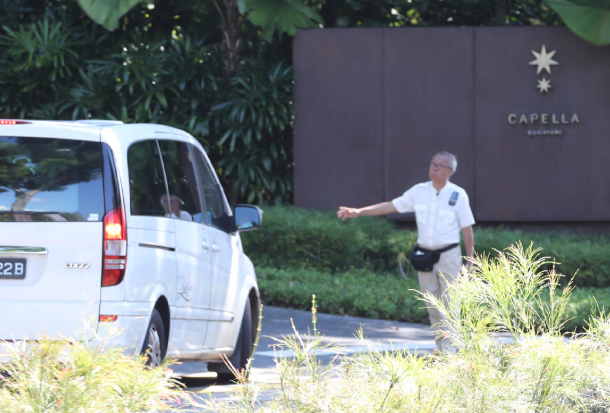 A security guard Monday stops a vehicle at the entrance to Capella Hotel, where a U.S. advance team is staying ahead of the U.S.-North Korea summit on June 12. [YONHAP]

Singapore’s resort island of Sentosa is emerging as the likely location for the June 12 summit between North Korean leader Kim Jong-un and U.S. President Donald Trump, according to various reports.

An advance team of officials from North Korea and the United States have been in Singapore since May 28 working on logistics, security and protocol issues for the summit, despite Trump only officially green-lighting the talks last Friday.

Last week, the two sides held meetings on Sentosa, which is known for its man-made beaches, golf courses, a casino and Universal Studios theme park, and is linked to the mainland by causeway, cable car and monorail.

The island was transformed from a British military base in the colonial period to a tourist attraction starting in 1972 after it was renamed Sentosa, which means “peace and tranquility” in Malay.

Capella Singapore, a luxury hotel on the island, has been reported as a likely venue for the summit between Trump and Kim. A U.S. delegation led by Joe Hagin, the deputy White House chief of staff for operations, resided at the Capella last week. The North Korean delegation, led by Kim Chang-son, director of the North’s State Affairs Commission Secretariat, considered a chief of staff to Kim Jong-un, stayed at The Fullerton Hotel Singapore.

The two sides reportedly met at Capella last week to discuss logistics and security for the summit, and reporters were banned from entering the building.

According to Kyodo News on Monday, the United States selected Sentosa as the location, citing sources with knowledge of the summit, but the North Koreans have not yet given their approval. Bloomberg reported Monday that Capella is the only big Singapore hotel with all its rooms and restaurants blocked out for the week surrounding June 12, coinciding with the summit date.

Trump called off the U.S.-North summit through a letter on May 24, while leaving open the chance that it could still take place as originally scheduled, but the U.S. advance team continued negotiations with North Korean officials.

Trump officially called the summit on again after a visit by Kim Yong-chol, the highest ranking North Korean official to visit Washington in 18 years, to deliver a personal letter from leader Kim Jong-un.

Some other potential venues mentioned for the summit have included the Shangri-la Hotel, the Marina Bay Sands and St. Regis Hotel.

CNN reported Sunday that Hagin has been given wide leeway to determine the best options for holding the summit, including its location. It also cited two officials as having said that Hagin has kept sensitive logistical details from Trump in the past, for fear that the president might tweet about them ahead of time. He was said to have finalized most of the logistical details for the summit, CNN reported citing a senior White House official, following four meetings with North Korean officials over the past week.

The locations of such events are often kept secret for security reasons.

There have also been questions on who will foot the bill for North Korean officials’ accommodations, and the Washington Post on Friday reported that the United States is open to covering the cost of lodging at North Korea’s preferred five-star luxury hotel, citing two sources, but that it’s mindful that Pyongyang may view U.S. payment as insulting. It reported that U.S. planners are thus considering asking Singapore, the host country, to pay for the North Korean delegation’s bill.

Heather Nauert, spokesperson of the U.S. State Department, said Saturday that the United States is “not paying,” for the North Korean delegation, nor is it “asking others to do so.”

Singapore Defense Minister Ng Eng Hen said Saturday during the Shangri-La Dialogue, an annual regional security conference, that his country will bear some of the cost of the planned summit between Trump and Kim.

“It is a cost that we’re willing to bear to play a small part in this historic meeting,” he told reporters.

The International Campaign to Abolish Nuclear Weapons, the recipient of the 2017 Nobel Peace Prize, offered Saturday to pay for the hotel costs of the Singapore summit, “as a contribution to efforts to prohibit and eliminate nuclear weapons.”

The Geneva-headquartered international organization said in a statement, “The Nobel Peace Prize included a cash prize and we are offering funds from the prize to cover the costs for the summit, in order to support peace in the Korean Peninsula and a nuclear-weapon-free world.”