Collapsed building was over 50 years old

Collapsed building was over 50 years old 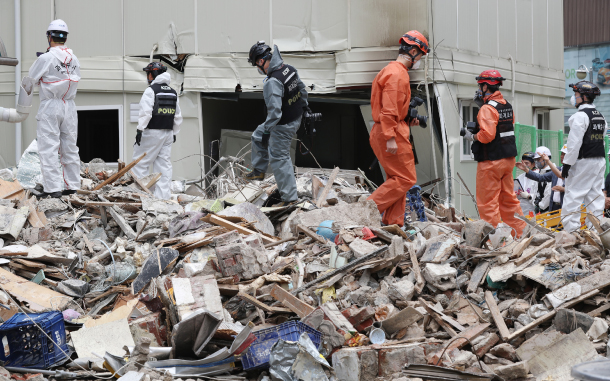 Police officers and firefighters examine the rubble of a collapsed building in Yongsan District, central Seoul, on Monday. The building was completed in 1966 and collapsed on Sunday. Residents believe the cause was cracks in the foundation. [YONHAP]

Residents of a four-story building that collapsed in central Seoul on Sunday are blaming the Yongsan District Office for ignoring their complaints about cracks in the foundation that they called a recipe for disaster.

The building, which consisted of restaurants on the first and second floors and living quarters on the third and fourth, collapsed at 12:35 p.m. A 68-year-old woman living on the top floor sustained non-life-threatening injuries, according to police. The other residents were not at home, and the restaurants were all closed, which prevented further casualties.

Authorities have yet to identify the precise cause of the accident. Because the building was completed in 1966, police and firefighters believe it was the outcome of progressive deterioration.

The injured woman told firefighters who arrived at the scene that the building “suddenly started shaking” and then fell.

A worker at a nearby restaurant said she heard a loud sound akin to an explosion and immediately smelled something burning. By the time she ran out onto the street, the building had already crumbled, she said.

Residents and restaurant owners of the ill-fated building blamed the Yongsan District Office for turning a blind eye to their complaints.

Officials initially denied receiving any complaints about the building but admitted in a statement on Sunday night that they found one dated May 11.

One official who spoke with the JoongAng Ilbo on the condition of anonymity said employees from the office visited the building after receiving the report and saw that pieces of the outer wall on the first floor had fallen off.

They did not believe the damage was serious and advised the building owner to “handle” the issue and “see how things go.”

Jeong Jae-young, a restaurant owner who reported the case to the Yongsan District Office, told the paper that the damage occurred last month after heavy rainfall. When he called the office, Jeong was told to email the office a photo of the wall. He did on May 9, he said, and received a visit two days later, but all the officials did, according to Jeong, was tell him to get the landlord to fix the problem. The landlord never did.

Police officers, firefighters and forensic analysts combed the rubble on Monday for clues. Some residents in the neighborhood said they started noticing cracks on their buildings’ walls ever since Hyosung Heavy Industries started construction of a nearby apartment complex in March 2017.

Police are planning to summon the landlord for questioning soon.