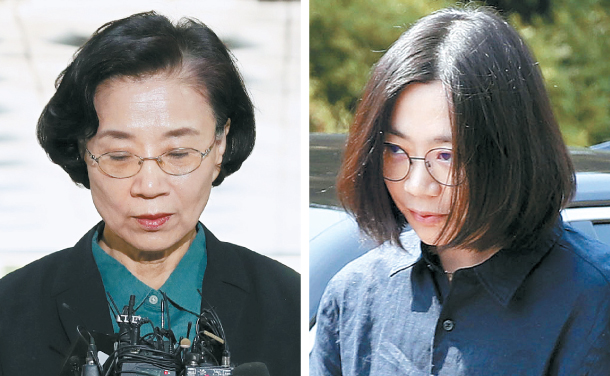 Lee Myung-hee, left, the wife of Hanjin Chairman Cho Yang-ho and chairwoman of the group’s nonprofit, appears at the Seoul Central District Court on Monday. Cho Hyun-ah, right, her daughter, appears at the Incheon Main Customs Office on Monday. [YONHAP]

Two members of the family that owns Hanjin Group, the parent company of Korean Air, appeared before authorities on Monday to answer to charges of abusing employees and smuggling goods into the country.

Lee Myung-hee, the wife of Hanjin Chairman Cho Yang-ho and chairwoman of the group’s nonprofit, attended a hearing for her arrest at the Seoul Central District Court on Monday morning.

“I am very sorry to everyone,” she told reporters before entering the building.

Last week, police requested a warrant for Lee’s arrest. She faces charges for assaulting and insulting employees, including one charge for “use of special violence.” Special violence refers to harm involving dangerous objects. In Lee’s case, the object was pruning shears.

According to police, Lee threw pruning shears at a janitor in her residence in Pyeongchang-dong, central Seoul, for not monitoring the entry gate. She was also caught on camera attacking employees at a hotel construction site in 2014. Police have so far secured testimony from 11 victims, including her chauffeur and maid.

In seeking a warrant, police said Lee might try to destroy evidence or coerce people into changing their testimony. The court did not announce its decision as of press time on Monday.

Lee is the mother of Cho Hyun-min and Cho Hyun-ah, whose “nut rage” case became the subject of global ridicule in 2014 when she ordered a taxiing Korean Air plane at New York’s John F. Kennedy Airport to return to a gate because she was dissatisfied with the way a fly attendant served her macadamia nuts. They were given to her in a bag rather than on a plate.

Cho Hyun-ah now faces allegations that she and her family smuggled luxury goods into the country without paying due taxes. She appeared at the Incheon Main Customs Office on Monday for questioning.

Allegations that the Chos smuggled luxury goods into the country have been circulating since April. Korean law stipulates that anyone bringing an item worth more than $600 into the country must report it to customs. Many items that the Cho family was said to have smuggled are worth much more than $600. They include name-brand bags, furniture and art pieces. The offense carries a maximum sentence of five years in prison and fines of up to 10 times the duties evaded.

Last month, the Korea Customs Service raided the offices of a Korean Air contractor in Goyang, Gyeonggi, and found 2.5 tons of goods believed to have been smuggled by the family. The customs service said it found a lead while going through Cho Hyun-ah’s phone records.

Meanwhile, Cho Hyun-min, the youngest daughter, faces a probe for throwing a cup of juice at employees during a meeting in March. The family is being investigated by more than 10 law enforcement agencies on accusations including gaining unfair admission to academic institutions and giving unfair favors to affiliates.