“MUR/MURS, la peinture au-dela du tableau” is a mural exhibition currently being held at the Gyeonggi Museum of Modern Art and running until June 17. Above are works by Christian Jaccard on the left and Soizic Stokvis on the right. [GYEONGGI MUSEUM OF MODERN ART]

Walking into an art museum, one expects to see works of art hanging on the walls or sculptures strategically arranged throughout galleries or videos being projected in dark screening rooms. But this summer at the Gyeonggi Museum of Modern Art (GMMA) in Ansan, Gyeonggi, you will not find paintings or projections presented on the walls, but instead the walls themselves have become works of art, painted and carved in different colors and styles.

GMMA’s ongoing exhibition “MUR/MURS, la peinture au-dela du tableau” shows that art can be realized through whatever medium it is allowed to exist. Running until June 17, the “MUR/MURS” exhibit features works by eight French contemporary artists who have recreated the inner walls of the museum with their own murals, the grandeur of which can only be properly experienced by standing in front of the 29.5-foot-high murals in person.

While most of the murals that we come across are the paintings or graffiti on the sides of buildings in the city, the artists who participated in the exhibit - Janos Ber, Claire Colin-Collin, Michel Duport, Christian Jaccard, Christian Lhopital, Olivier Nottellet, Emilie Satre and Soizic Stokvis - are taking part in the exhibition in order to expand the horizons of art, according to Olivier Delavallade, director of the French art museum, Domaine de Kerguehennec, which is co-hosting the exhibition.

Artists have come to the Gyeonggi Museum of Modern Art to create the works directly on the walls of the museum. Christian Jaccard created his mural by burning marks on the wall.[GYEONGGI MUSEUM OF MODERN ART]

“Mural painting is the first form of art in history, starting with our ancestors tens of thousands of years of ago who left paintings in caves,” said Delavallade. “In this era, mural paintings symbolize art’s exodus from its confinement. Paintings used to be restricted to the canvas and the wall, but now they’ve transcended that dimension and the walls themselves have become the works.”

The first two works that welcome guests create a playful mood. The untitled works of Ber and Sartre colorfully adorn the walls, each giving life and energy to the walls which would have remained as a silent background in the past. Notellet’s yellow wall and Lhopital’s charcoal drawings which follow next stand in contrast to the previous works, adding a touch of solemnity. Staring into Lhopital’s work may put visitors into a daze, with unidentifiable faces and figures mixing and mingling like smoke in the air. A video of the eight artists creating their murals in the museum plays before moving on to the next work.

Duport’s works take on different forms according to the different times of the day. His mural paintings stay the same but the three-dimensional installations above those paintings make different shadows with the movement of the sun. In the next room, Colin-Colhas literally carved her work into the wall to make it look as if the wall has been chipped into small bits and pieces like dry soil in a severe drought. Walking closer to the wall allows visitors to appreciate the depth of the piece. 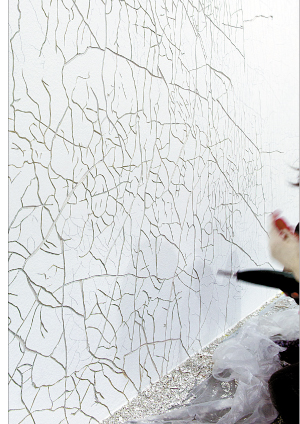 Claire Colin-Collin carved into the walls of her mural. [GYEONGGI MUSEUM OF MODERN ART]

In the final gallery, Stokvis’ red-and-white symbols stand in stark contrast to Jaccard’s burn marks that cover the walls. The two works each show something completely opposite both visually and symbolically; the former taking on the message of modernity and artificiality as symbolized by the written language that we use, and the latter exploring human nature through marks created by burning chemicals on the wall to show a side of human instinct that remains inside all of us from the time that early humans began to make use of fire inside caves.

“The word ‘mur’ means wall in French, and it also means to whisper,” said Delavallade. “The title of the exhibition ‘MUR/MURS’ symbolizes the conversations between walls, buildings and paintings, which can all take place in one place. The idea of fine art exists in an extended meaning, in relation to the many things that surround it. We wanted to show how that takes place in this exhibition.”

GMMA is a 15-minute walk from Choji Station, line No. 4, exit 1. Admission is free. The museum is open from 10 a.m. to 6 p.m. in June, and closed every Monday. For more information, visit www.gmoma.ggcf.kr