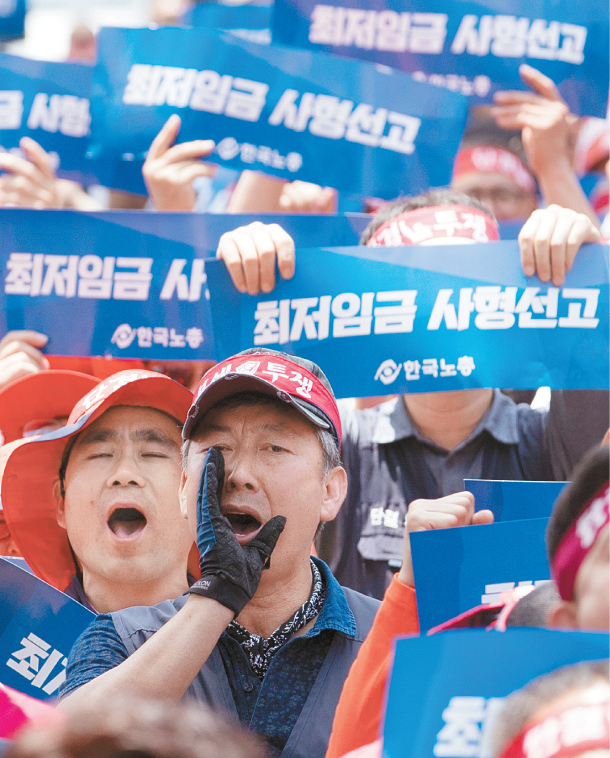 Members of the Federation of Korean Trade Unions protest against the revision to the minimum wage law, which obtained an approval by the cabinet, on Tuesday near the Blue House in central Seoul. [YONHAP]

A revision to the law that changes the way the minimum wage is calculated was approved by the cabinet at a meeting on Tuesday, the latest development in the controversial income-led growth economic policy of the Moon Jae-in administration.

“[The amendment to the minimum wage law] is a result of an extended discussion between the ruling and opposing parties in order to guarantee [sufficient] wages for low-income laborers and to relieve small and mid-sized companies and businesses of a burden [of increasing labor costs] at the same time,” said Lee Nak-yon, Korea’s prime minister, during a cabinet meeting on Tuesday at the Seoul government complex.

The decision by the cabinet came a week after the National Assembly passed the amendment during a plenary session on May 28. It has to be signed by President Moon Jae-in.

Under the amendment, which will go into effect next year, the minimum wage will include regular bonuses exceeding 25 percent of an employee’s monthly base wage and welfare benefits - coverage including health benefits and transportation, meal and lodging fees - exceeding 7 percent of the monthly wage.

This new way of calculating wages means that companies will not have to raise some employee’s wages if what they receive under the new system meets or exceeds the wage increases stipulated by the Moon government’s increases to the minimum wage.

The bill is aimed at helping companies struggling due to the spike in the minimum wage, which went up by more than 16 percent this year and is scheduled for another increase next year.

The bill comes at a crucial time as trilateral talks between the government, labor and businesses representatives have until June 28 to decide next year’s minimum wage.

The passage of the amendment drew mixed responses.

The Korea Employers Federation (KEF) welcomed the decision and said that the revised law will reduce the burden on small and mid-sized companies through a statement on Tuesday.

The KEF added that it will provide necessary support to the companies in their effort to reorganize their wage system but expressed concern that the revision will have a limited effect on companies with unions.

For those companies, their unions must agree to receive the regular bonuses on a monthly basis instead of every two to three months in order for the bonuses to be included in the minimum wage.

Representatives of Korean workers, on the other hand, expressed their strong disapproval.

The Korean Confederation of Trade Unions, one of the two largest umbrella union groups, condemned Moon for not vetoing the bill outright and said the decision of the cabinet was a “reversal of the labor policy,” referring to Moon’s pledge to increase the minimum wage to 10,000 won ($9.36) per hour during his term.

“[The revision] would eliminate the effect of minimum wage increase and is nothing but a wage reduction law,” said the Federation of Korean Trade Unions, the other major umbrella group which held a protest in a park near the Seoul government complex on Tuesday.

“It’s true that the effect of the minimum wage increase would be reduced for some low-income workers,” the prime minister said in the meeting.

“The minimum wage hike and the reduction of working hours are policies meant to improve the income of [low-wage] earners and their quality of life,” Lee added. “The pain and side effects we experience at this early stage is something we have to overcome, and the government is working on a number of measures to minimize such pain.”