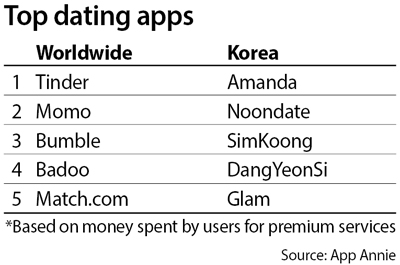 For app developers looking to pull in the big bucks, lovelorn Romeos are the hottest targets, both in Korea and abroad.

Facebook’s announcement signals that, while online dating isn’t new by any means, the sector remains attractive enough for the tech giant to jump into it and hope the market expands.

Tinder is, without a doubt, the dominant player in the global dating app scene. It allows users to see more profiles and “superlike” more users every day if they sign up for the company’s premium paid service. Last year, Tinder ranked second in non-game app revenue collected from users.

Most dating apps’ basic features are free. But for users who want more, apps also offer paid services, which have become their main source of revenue.

Korea is catching up to the paid dating app trend. According to global market researcher App Annie, four of the top 10 mobile apps that Koreans spent money on last year were dating services.

“The number of dating app users is consistently rising in Korea, so those who pay for such services are naturally increasing as well,” said a local spokesman for Tinder. The service launched a Korean version in 2015.

The top five dating apps by revenue in Korea are Amanda, Noondate, Simkoong, DangYeonSi and Glam. Their functions are mostly similar to those of global dating apps, but Korean developers have included a novel feature that automatically blocks profiles if a user already has their number stored in their phone so potential Cassanovas won’t run into their acquaintances.

Amanda is by far the most-used dating app in the country, with four million users. Launched in 2014, it was the fifth mobile app by revenue last year, behind Kakao Talk and the music streaming service Melon. Its annual revenue was 6.6 billion won ($6.17 million).

Amanda first became famous for its distinctive application process. Every potential user has to receive a rating out of five stars from users already using the app. If their score doesn’t average three out of five stars, they’re denied access to Amanda. As Amanda gained popularity, face-rating stories spread across online communities.

App Annie estimates that the global online dating market is worth approximately 6 trillion won, and values the Korean market at around 100 billion won. The targets of online dating apps are users in their 20s and 30s who are more comfortable with online services.

In total, there are more than 200 dating apps active in Korea, and they aren’t all about fun and dates.

There already have been reported cases where in which dating apps were used for prostitution, including of teenagers. Some apps are also coming under fire for opening their doors only to those with high-paying jobs, diplomas from prestigious universities or swanky zip codes.