Korea loses out on EVs in China

Korea loses out on EVs in China 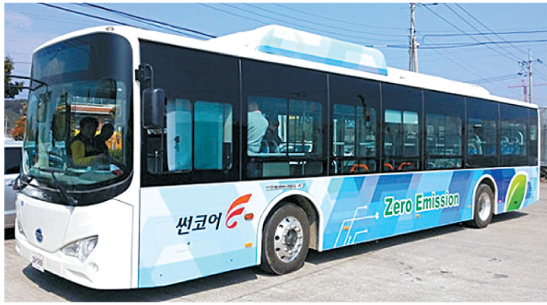 An electric bus made by China’s BYD. [JOONGANG PHOTO]

China’s electric vehicle (EV) industry has shown exponential growth in the past few years. Korean carmakers, however, have barely gotten a nibble out of the growing pie.

Chinese carmakers are developing their own EV technology, and government policies that give incentives to local carmakers have played a big role in fostering local brands and preventing imported cars from getting traction.

“If such a trend continues, China will sell 1.23 million EVs in 2020,” said an official from the KOTRA. “China’s government aims to have a total of 5 million EVs in the country by 2020 and achieve a production capacity of 2 million EVs per year,” the official added.

Korean carmakers, however, are being left in the dust.

According to Korea International Trade Association data, Korea’s EV exports to China are falling at a precipitous rate. In 2015, Korean carmakers exported $161,725 worth of EVs to China. In 2016, however, only $107,380 worth of EVs were exported, a 33.6 percent fall. There are no figures for EV exports in 2017, partly because Korean companies switched to manufacturing in China instead of exporting EVs made in Korea.

Tesla’s Model S is the only imported model in the top 20 EV models sold in China. It is 17th on the list.

Beijing is behind the explosive growth. EVs help clean the polluted air of China’s cities, and the government wants China to be a leading player in the global EV industry.

The government required every local carmaker to dedicate 8 percent of its production of cars to EVs starting from this year. That percentage will be raised by 2 percent points every year until 2020. Infrastructure investments are also taking place aggressively. The government plans to install a total of 4.8 million EV chargers in 12,000 locations by 2020. At the moment, one charger has to take care of three EVs but the government plans to decrease the number to one vehicle per charger.

The Beijing government is providing EV incentives that work for lower-priced, locally produced models and aren’t that attractive to buyers interested in higher-priced imports.

In 2016, Beijing suspended incentives to Korean battery makers for no specified reason. Industry insiders suspect it to be another policy to support local battery makers since Korea’s battery technology is top-notch.

“In 2016, Chinese companies that make EVs invested a total of 5.5 trillion won ($5.1 billion) in R&D, which is the highest level among global carmakers,” said Kim Joo-cheol, who works on China-related issues at KOTRA. “It means private companies, too, are starting to respond to the government’s policy.”

Chinese EV makers are even making inroads to Korea. BYD established a unit in Jeju Island to produce electric buses. Since last year, BYD’s eBus-7 models have been operating on Udo Island.

“Korean carmakers still have long way to go in terms of developing electric buses,” said Park Jae-yong, head of the Korea Automotive Future Research Institute. “Chinese carmakers consider that segment to be a weak point and are targeting it to advance into Korea.”