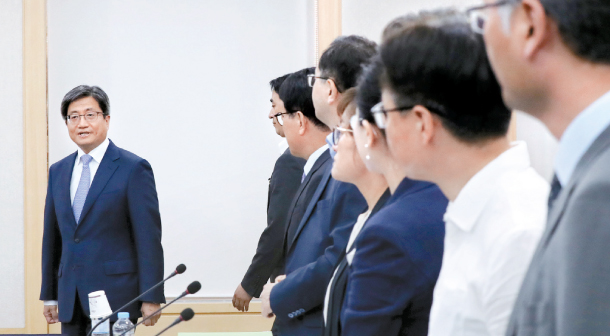 Supreme Court Chief Justice Kim Myeong-su, left, and members of a civic committee on reforming the judicial branch, comprised of judges and other professionals, meet at the Supreme Court in southern Seoul on Tuesday to discuss the recent power abuse scandal. [YONHAP]

The Supreme Court on Tuesday made public 98 documents found by its internal investigative team that may be evidence of power abuse by a former chief justice to please the Blue House of disgraced former President Park Geun-hye.

“We decided to release to the public 90 files that have been mentioned in the report of the special investigative team [on the power abuse allegations in the judiciary] but made sure the names mentioned in these files have been changed to pseudonyms to protect their personal information,” said Ahn Chul-sang, head of the National Administration Court (NCA), the administrative body of the Supreme Court, in a statement Tuesday.

Ahn, who is also head of the internal investigative team of the Supreme Court, said the team is also releasing eight additional files that were not mentioned in its report but have been mentioned in media outlets.

One of these is a document entitled, “Granting democratic legitimacy to BH,” with BH standing for Blue House. The document states that “it is more important that the BH gets to influence the selection of Supreme Court justices rather than in recommending candidates” but that it is the “chief justice’s opinion that there is a risk here of sparking controversy about a violation of independence of the judicial branch.”

“The judicial branch has been doing all that it can to support the president in conducting state affairs,” reads a document entitled “Cases of cooperation by the judicial branch on government management,” one of the 90 documents mentioned in the report by the special investigative team. The document lists 16 Supreme Court decisions on cases including the one on Won Sei-hoon, a former National Intelligence Service director, in 2015, on the dismissal of Korail workers also in 2015 and on a national teachers’ protest in 2012.

Many of these cases involved the Supreme Court overturning rulings of lower courts.

A scandal surrounding former Chief Justice Yang Sung-tae arose when an internal investigative team looked into practices at the Supreme Court when Yang served as chief justice from 2011 to 2017. It reported last month that it found 174 documents in the computers of the NCA that may be evidence of the violation of the principle of separation of power between the executive and judiciary branches.

Yang is accused of abusing his power on the Supreme Court to curry favor with the previous government and get support for his judicial agenda. He faces a litany of accusations including creating a blacklist of judges based on their political and ideological leanings.

Chief Justice Kim Myeong-su said he will make a decision on whether to seek criminal charges against Yang after hearing from judges. Local courts are hosting internal meetings this week.

“We cited 174 documents in our report, but listed a total of 410 documents that we said may be related to the power abuse allegations,” Ahn said in a statement. “We’ve been asked by the members of the court, media outlets and the people to release to the public all 410 documents.

“But we thought it more reasonable to release the 98 documents for now, and we may release more depending on the need of the public to know,” he added. “We hope that this process will help the investigative team regain the trust of the people.”