Kim-Trump summit gets a time and date

Kim-Trump summit gets a time and date 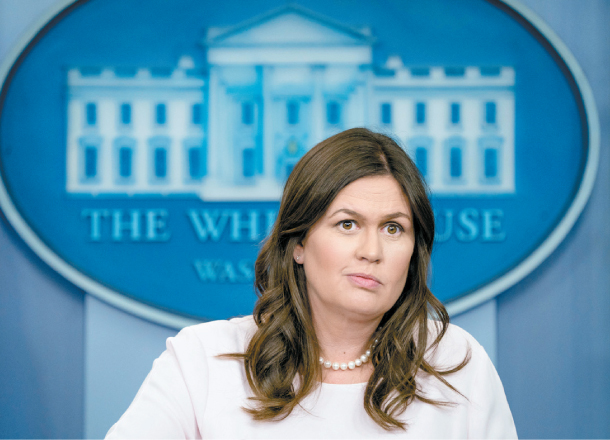 The first summit between North Korea and the United States will start at 9 a.m. next Tuesday in Singapore, and working-level discussions between the two countries have been “very positive” so far with “significant progress” made, the White House said on Monday.

Sarah Huckabee Sanders, the White House press secretary, said during a regular briefing that the advance team in Singapore was “finalizing” logistical preparations and will remain in place until the summit begins. The venue of the historic meeting was not revealed. It was the first time that either country announced the time of the summit between U.S. President Donald Trump and North Korean leader Kim Jong-un.

In the demilitarized zone, where U.S. Ambassador to the Philippines Sung Kim is leading a delegation for negotiations with North Korean officials on a summit agenda, discussions have been “very positive, and significant progress has been made,” Sanders said, without detailing further.

When asked about the contents of Kim Jong-un’s letter to Trump, which was personally delivered by Kim’s special envoy last Friday at the White House, Sanders refused to get into specifics but quoted Trump as saying they were “interesting.”

One sign that preparation for the summit was apparently going smoothly came Monday, when the fifth working-level meeting held between both countries in the demilitarized zone ended after only an hour and a half, far shorter than the previous rounds, which took four to five hours.

Local diplomatic sources with knowledge of the meetings said the gap between North Korean and U.S. officials was initially wide, as Washington pressed Pyongyang to give some acknowledgement of the need for complete, verifiable and irreversible denuclearization before the June 12 summit. The North Korean side, in return, reportedly asked for some complete, verifiable and irreversible security guarantees, specifically asking Washington to make changes to U.S.-South Korea military exercises and the deployment of U.S. strategic assets around the Korean Peninsula.

Precisely how that gap was narrowed is unknown. After a meeting with Kim Jong-un’s special envoy at the White House last Friday, Trump said he thought Pyongyang was serious about denuclearizing and that he discussed “ending the Korean War” with him.

If a political agreement on the need to inspect North Korea’s nuclear stockpile is made, Yukiya Amano, director general of the International Atomic Energy Agency (IAEA), said his group was prepared to resume the process “within weeks.”

“The agency is closely following developments related to the nuclear program” of North Korea, Amano said Monday during the agency’s board of governors meeting in Geneva.

“We continue to enhance our readiness to play an essential role in verifying the DPRK’s nuclear program if a political agreement is reached among countries concerned,” he said. DPRK are the initials of North Korea’s official name, the Democratic People’s Republic of Korea.

The last time IAEA inspectors were allowed in the North was April 2009, shortly after Pyongyang announced it would walk away from six-party denuclearization talks.