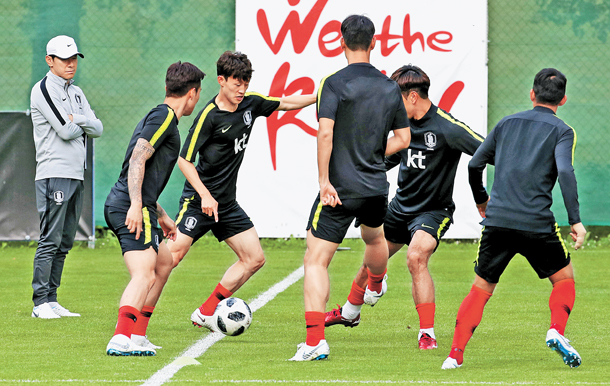 Korea’s football coach Shin Tae-yong said before the national team’s training on Monday that more than 90 percent of his plans for the 2018 FIFA World Cup are complete.

Korea is in World Cup Group F alongside Sweden, Mexico and Germany. Shin’s team is currently training in Leogang, Austria, with 23 players.

“Almost everything has been decided,” Shin told Korean reporters before training at Steinbergstadion in Leogang, Austria. “Unless there are injured players, we will compete at the World Cup with my solutions.”

In Austria, Korea will play two friendly matches before flying to their World Cup base camp in St. Petersburg on June 12. The Taeguk Warriors will play Bolivia on Thursday and will take on Senegal on next Monday.

“We’re not going to show our set pieces and other tactical movements in the match against Bolivia,” he said. “But for our last World Cup tune-up against Senegal, which will be played behind closed doors, we’re planning to test everything that we’ve prepared.”?

Shin’s side had two friendly matches at home before coming to Austria. Korea beat Honduras 2-0, but fell 3-1 to Bosnia and Herzegovina. Shin confirmed his final roster of 23 players after the two matches.

Although there were concerns that his team is not ready for the World Cup, Shin reiterated that nearly everything is set.

“I’ve already decided the best 11, formations and tactics that we’ll use during the World Cup,” he said. “From now on, we’ll have to focus on helping our players to get in shape.”?

Shin said he has watched recent matches of their World Cup Group F opponents. Defending champions Germany recently fell 2-1 to Austria in their World Cup warm-up, while Sweden and Denmark played to a scoreless draw. Mexico, however, beat Scotland 1-0.

“I watched the Germany-Austria match, and the Germans didn’t have such a good game,” he said. “Assistant coach Cha Du-ri attended the match between Sweden and Denmark, and I heard that they were even booed by their home fans. At this point, it looks like everyone is trying to hide their power.”

Shin, who previously led Korea’s under-20 and under-23 national teams, said he is also aware of their Group F opponents’ final squad selections.

“I’m curious why the Germans didn’t pick Leroy Sane, but for the rest of the other players, it’s pretty much what I expected,” he said of Germany’s final roster selection.

Korea started their first training session in Leogang after arriving in the Austrian resort town on Sunday. Shin said defender Jang Hyun-soo, who missed the two last friendlies due to an ankle injury, is now ready to play.

“He is now perfectly fit,” Shin said. “He could have played against Bosnia and Herzegovina, but we decided to give him a rest.”

Korea unveiled squad numbers before training. While most players received the numbers that they have been using with the national team, the No. 10 jersey went to Hellas Verona attacker Lee Seung-woo, the youngest player at 20.

“My thoughts on Lee haven’t changed and I’m confident that he will have a good game,” he said. “Lee received No. 10 and I believe he would feel some responsibility after getting a good number.”

Shin said his side’s task for the remaining period is to increase their fitness. Korea will open their World Cup campaign with Sweden on June 18.

“We checked our players’ performance through a wearable global positioning system (GPS) device, and I felt that we lacked stamina,” he said. “We will try to fix that problem through basic training.”