Kim In-kyung looks for a repeat

Kim In-kyung looks for a repeat

After finishing tied for 34th at the U.S. Women’s Open at Shoal Creek, Alabama last weekend, Kim In-kyung returns to the Shoprite LPGA Classic Presented by Acer in New Jersey to defend her title. 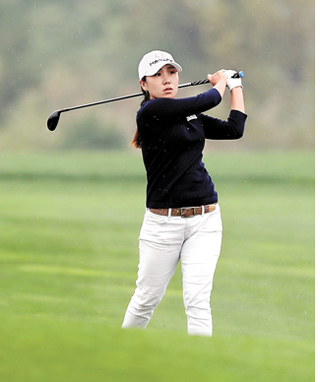 The tournament will be played at Stockton Seaview Golf Club where Kim won the first of her three titles in 2017. At the time, Kim defeated Anna Nordqvist of Sweden by two shots and prevented her from winning the tournament for the third consecutive year. Over the three rounds, Kim shot 11 under par.

Starting with her victory at the Shoprite Classic in June 2017, Kim won the Marathon Classic in July and won the Ricoh Women’s British Open in August, marking the best season of her career.

Until last month, Kim struggled to continue her success from 2017. She got off to a slow start because she had to adjust to a new set of clubs at the beginning of the season. In January, Kim’s clubs went missing while she was travelling from Miami to San Diego. The bag she lost carried the clubs she used to win the Ricoh Women’s Open. Kim had no other choice but to get a new set of clubs.

A few weeks after the incident, Kim found her clubs being sold at a sports store in Carlsbad, California for a low price.

Kim seems to have finally gotten her groove back, finishing runner-up at the LPGA Volvik Championship on May 27 and having played well at the U.S. Women’s Open last weekend.

“It’s good that I’ve adjusted to the [new] clubs and that my condition is great,” said Kim.

For Kim to defend her title this weekend, she once again needs to play better than Nordqvist, who won the event in 2015 and 2016 and finished runner-up last year. When she won the tournament in 2016, she set a tournament record at 17 under par, 196.

“Playing in a tournament [as a defending champion] is always exciting,” Kim said. “Since I’ve never [had the opportunity to defend] a title in my career, I really want to challenge myself to do it [this time].”

In addition to Nordqvist, Kim will also have to compete against Koreans Park Sung-hyun and Ko Jin-young, Lee Min-jee of Australia and Lydia Ko of New Zealand, with the latter two seeking their second wins of the season.

The first round of the Shoprite LPGA Classic will broadcast live on JTBC Golf starting at 2:30 a.m. on Saturday.