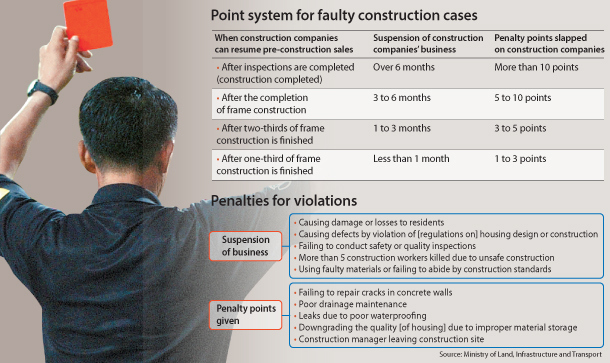 The residents of a brand-new apartment complex in Guri, Gyeonggi, were hit by an unpleasant surprise this past winter. They couldn’t do their laundry because the water pipes kept freezing on colder days.

The residents had just moved into the apartment complex in September.

“Washing machines would break down and the water pipes would freeze and burst,” said Kim Jun-chul, a resident of the apartment complex. “While most units were affected, the construction company that built the complex, the Korea Land and Housing Corporation, only began repairs recently.”

The residents of an apartment complex in Gimpo, Gyeonggi, even filed a petition with a Blue House over the complex’s shoddy construction. The apartment was built by a major construction company in Korea, and residents began moving in April. But whenever it rains, residents are unable to stop dew condensation in the parking lot and leaks in the ceiling. More than 600 people, about half of the residents at the complex, signed the petition.

As reports of poorly constructed apartments grow, the government has decided to bolster its regulatory measures. An amendment to construction regulations that’s expected to pass the National Assembly soon would expand restrictions on companies with shoddy records from offering pre-construction sales of their new apartments. If the amendment is approved it will go into effect in September.

The government’s new regulations will set a point system for construction violations. 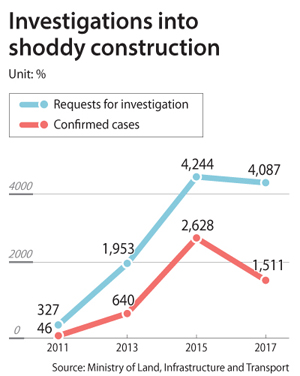 Any company that averages more than one penalty point in the past two years will be restricted from selling apartments before construction is finished. The average is calculated based on the number of construction sites a company has across Korea.

A company can receive one penalty point if it fails to repair cracks in the wall or poorly maintain drains. Once a company has accrued one to three penalty points, they will be restricted from pre-construction sales until one-third of the frame construction of the apartment complex is completed.

If a company cannot conduct pre-construction sales, it must procure the necessary funds to complete the complexes’ construction on its own, without the help of homebuyers.

The government is also toughening its penalties for construction companies that have had their businesses suspended, which means they cannot start any additional projects other than those already underway.

Before, a company could conduct pre-construction sales of an apartment if more than 50 percent of its frame construction was complete, regardless of how long it had its business suspended.

But if a company receives a suspension of more than six months, it will not be allowed to sell apartments until the complex is 100 percent finished and quality inspections have been completed.

Under the new law, a company can have its business suspended if it uses faulty or defected materials in construction or more than five construction workers were killed due to poor safety enforcement at the sites.

While the changes to regulations are expected to improve the quality of housing construction across Korea, some experts expressed concerns that the new measures could deal a blow on smaller companies.

“It’s understandable that the government is trying to prevent faulty construction through policies,” said Doo Sung-kyu, a researcher from the Construction Economy Research Institute of Korea. “Large construction companies will be able to cope with the penalties, but such measures could do serious damage to smaller companies.”