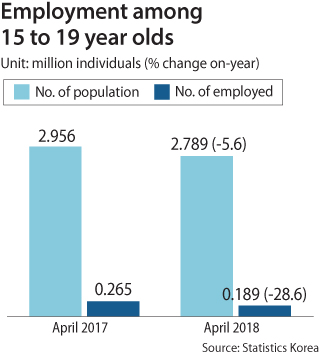 Employment fell dramatically in the past year among teenaged Koreans, most of whom are part-time workers earning minimum wage.

The number of people employed in that age group has been on the decline since last October, the statistics agency’s data shows. In February this year, it fell by 15.2 percent compared to a year earlier.

Another study done by the statistics agency and the Ministry of Gender Equality and Family shows that about 10 percent of middle and high school students have held part-time jobs.

Most teen Koreans who take part-time jobs are high school seniors finished with the college entrance exam, which is held in November every year.

Workers in this age group are seen as particularly vulnerable to minimum wage changes, leading local experts to speculate that they have fallen victim to the hike in the minimum wage that went into effect in January.

The Moon Jae-in administration raised the hourly base wage by 16.4 percent this year, the second-most drastic spike in history, to 7,530 won ($7.04). Its impact on the economy and hiring in Korea is being hotly debated in and outside of the government.

In 2017, about 77 percent of the employed in the teen age group were temporary or part-time workers, as indicated by data from the Korean Statistical Information Service, a database platform operated by Statistics Korea. Nearly 60 percent of them worked in retail and wholesale, as well as the food and lodging industries - sectors sensitive to changes in the minimum wage. Compared to a year ago, the food and lodging industry shed 28,000 jobs across all age groups, a 1.2 percent decline. Retail and wholesale jobs tumbled 1.6 percent, with 610,000 positions lost.

An official from the government explained that while it was “possible for the minimum wage increase to have an effect” and bring down the employment in the teen age group, the shrinking population has had bigger influence.

Statistics agency data shows that the population of the teen age group fell from 2.96 million in April 2017 to 2.79 in April this year, about a 5.6 percent fall.

“It’s difficult for anyone to be 100 percent positive about the effect of the minimum wage increase since we only have about three months to analyze,” Kim Dong-yeon, the country’s finance minister, told local reporters.