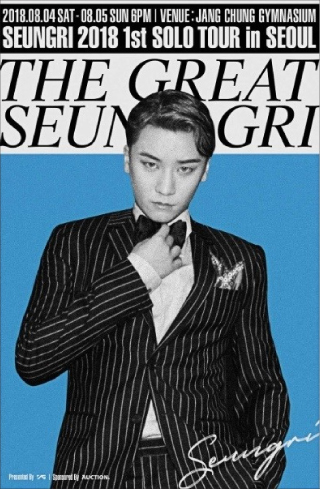 Seungri will release an EP in July and is expected to perform songs from the project at the concert.

The singer will perform with a band as well as a DJ at the concert to liven up each performance for the audience.

Tickets went on sale for members of the singer’s fan club on Tuesday, and tickets become available for the general public on June 21.

The singer has been keeping himself busy this year not only as an artist and an entertainer but also as a businessman. Along with appearances on television programs such as the MBC reality show “I Live Alone” and talk show “Radio Star,” the singer’s ramen restaurant has become a huge success, and he is preparing to launch more shops abroad.

Seungri is the only member of Big Bang who is not currently serving in the military. The singer has said that he will “enlist as soon as he finishes all of his previously arranged projects.”