Vicious voices scapegoat victims for speaking out : Korea’s legal system makes it easy to target those who have come forward with sex crime allegations

Vicious voices scapegoat victims for speaking out : Korea’s legal system makes it easy to target those who have come forward with sex crime allegations 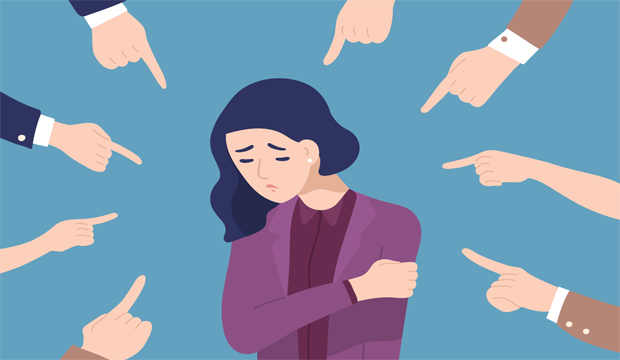 Although the initial heat of the Me Too movement may have subsided compared to the first round of testimonies that aroused a level of anger never seen before in Korean society, the spring of 2018 will inevitably be remembered as a time when Korea became more aware of many of its societal ills, thanks to the voices of victims of sexual assault and exploitation who have come forward with their experiences in recent months. Victims, mostly women, have shared stories that would not have been heard beforehand, and people have started to realize that Korean society has long turned a blind eye to the agonies of sex crime victims.

A notable trend that came out of the Me Too movement was the prevalence of men, claiming to be neutral, openly doubting the claims of the victims.

“Let’s wait and listen to the other side of the story.”

“She may be a ggotbaem (gold digger).”

“Why is she saying this now and not before?”

“He doesn’t seem like someone who would do that to someone else.”

These comments were commonly online under news articles about Me Too cases. The statements seem innocuous, but actually give the aggressors the benefit of the doubt while casting a suspicious eye on the victims. If courts ruled that the men were not guilty, the comments that accompanied the news often read, “I knew it.”

While many women have found the courage to come forward and men have started to realize that their actions may not be tolerable, victims of sexual assault still suffer. They have to deal not only with the painful memories of the assault, but also with a social atmosphere that, while it no longer silences victims directly, threatens them by saying that they will face charges of false accusation and defamation if they fail to fully prove their case, or in some cases, even after they successfully prove they were assaulted. 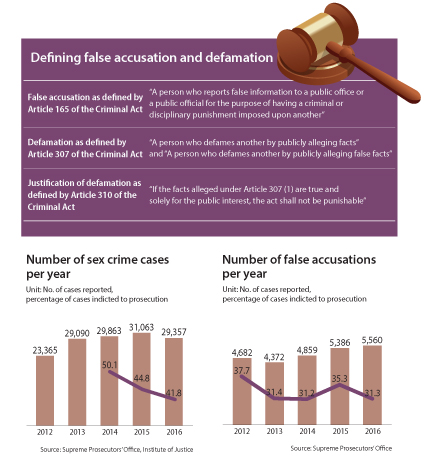 On Dec. 2, 2017, an anonymous internet user posted a petition on the Blue House online petition board, demanding that punishment for people caught making false accusations be strengthened. The petition came after singer Park Yoo-chun was accused of sexual assault by four women in 2016, but was found not guilty in each of the cases. Park then accused two of the women of false accusations. While one woman surnamed Song was found not guilty on Dec. 22, 2017, the other surnamed Lee was found guilty and sentenced to one year and eight months in prison in July 2017.

“Those who get damaged by false accusations struggle to return to their ordinary lives even if they win their cases in court,” reads the petition. “But the person who makes false accusations can live on without thinking that they have to correct their lies after they ruin someone’s life. A first-time offender only gets a punishment of one year, while the victims have to bare the lies for many years to come.”

The petition based its numbers on what it cited as “statistics from the [Supreme] Prosecutors’ Office,” claiming that “A total 3,617 cases of false accusations occurred last year [in 2016] … The percentage of false accusations of sex crimes was 40 percent of all the cases.” Though the petition did not specify that the punishment for false accusers of sex crimes should be punished more severely, it only cited sources relevant to sex crimes. The petition gathered a total of 10,251 signatures over the course of a month.

According to the Supreme Prosecutors’ Office, however, the number of false accusations that occurred in 2016 was 5,560, and the office does not keep track of the nature of each case, meaning that they have no official record of what percent of the cases are accusations of sexual assault. “We only record the number of cases according to the name of the crime, not by the different characteristics of each case. We have no idea where people have gotten the percentage from,” said an official from the office when asked whether the office had released such numbers in the past.

By definition of Article 156 of the Criminal Act, false accusation refers to the act of reporting “false information to a public office or a public official for the purpose of having a criminal or disciplinary punishment imposed upon another.” This means that in order for someone to be punished for false accusation, they must: 1) have made an accusation that’s completely false, 2) have reported someone to law enforcement and 3) have made an accusation of a crime with ill intent. So, even if a suspect of a sex crime is ruled not guilty by the court, the accuser cannot be charged for false accusation unless they meet all three standards.

“Some people on the internet think that just because someone is found to be not guilty, then the accuser has made a false accusation,” said researcher Choo Ji-hyun at the Korea Institute of Criminology. “But not only do they lack an understanding of what false accusation is, they only focus on the very few cases they see on the news. Even if there really are people who falsely accuse someone else on purpose, that number is too small compared to the number of sex crimes that happen each year.”

The number of sex crimes that occurred last year was 29,357 as opposed to 4,682 cases of false accusation. Only 31.3 percent of all the cases were indicted to persecution for false accusations, meaning that the police deemed two thirds of the cases reported as not worth pursuing. Seeing as how only 1.9 percent of sex crimes are reported to the police, according to a survey conducted by the Ministry of Gender Equality and Family in 2016, some question whether those asking for more severe punishments for false accusers have a valid argument.

“Calling someone a potential false accuser is an evidence of the misogyny that’s prevalent in the Korean society,” said researcher Choo. “The potential aggressors, many of whom are men, believe that the revelations of a sex crime is a threat to men in general, and so they try to silence the women by threatening them with methods like false accusation. Society is changing at a rapid pace, but they are trying to defy the new era with their old ways of silencing women.”

Article 307 of the Criminal Act contains two clauses, one which defines the act of defamation as “publicly alleging false facts” and the other, as “publicly alleging facts.” Though it’s not commonly found in other countries, the Korean criminal law can punish people for damaging one’s reputation even if the alleged facts are true, except for cases in which people exposed certain facts that “are true and solely for the public interest,” as justified by Article 310 of the Criminal Act.

In the case of Me Too testimonies for example, sex criminals have sued their victims in return, as has been the case with several anonymous victims such as 32-year-old Kim Ji-young (alias). Kim sued her ex-boyfriend earlier this year for forging her ID and posting personal information such as her name, phone number and pictures of her on the internet. Her ex threatened her instead, saying that he will countersue her for defamation because she had posted her case on the internet, citing his name. It took her courage to actually file a case, and fortunately, her ex could not make her case as Kim’s actions were to stop him from tormenting her, not to defame him.

In 2017, the Ministry of Gender Equality and Family published a book titled “Guide for Victims of Sex Crime Counteraccusations” in which it defined counteraccusation as “when a suspect of a sex crime accuses the victim of false accusation after they are sued by the victims, or when a victim is accused of defamation regardless of whether or not the victim has filed a case.” The goal is to silence the victims, threatening them into dropping their case and preventing them from voicing further accusations in the future.

“The victims are put in a position where they have to prove that their revelation is for the good of the public, and they must prove that they had been victimized by their aggressors. They must prove things like why they could not resist, and how they are the real victims, despite all the circumstances,” reads the guidebook.

It seems obvious that the state can punish someone who defames another person purely out of spite, but the idea of punishing someone for stating a fact is a controversy to this day. Lawmakers from both the ruling and opposition parties have agreed that measures should be taken to protect the victims and fully punish the aggressors, and they have been putting forward policies as a reaction to the Me Too movement, but the concept of defamation by true facts is not there just for the sake of the aggressors, according to the Ministry of Justice.

“If we abolish this article [of defamation of true facts], then we have no method of stopping sex offenders from spreading rumors about their victims,” said an official from the Ministry of Justice. A possible solution can come from applying the justification article more broadly for the victims, but a conclusion has yet to have been made among lawmakers and officials.

“The recent round of measures that came after the Me Too movement has been focused on punishing the aggressors, which is meaningful, but not so much on the aftercare of the victims,” said Nam Jeong-suk, president of the MeToo Network Korea and a former professor at the college of integrated studies at Sungkyunkwan University until 2012, when the school ended its contract with Nam after she reported a senior professor for groping her a year earlier.

“When a Me Too victim comes forward, they risk everything that they have. We get threatened and insulted beyond imagination, hearing things like, ‘Why would he do such a thing to you?’ or ‘He’s a loving father, would you like to ruin his family for a mistake he made?’ Policies should be directed towards helping the victims get back on track with their ordinary lives, protecting them until they do so.”