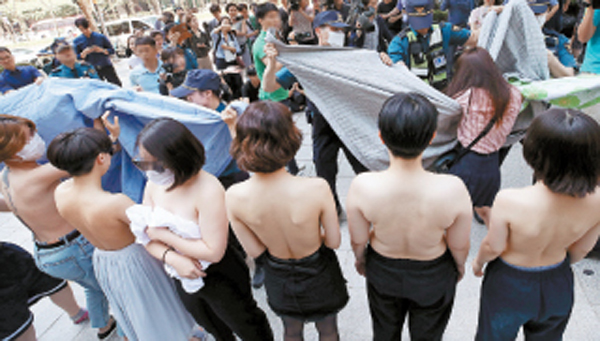 In “Gone with the Wind,” Scarlett O’Hara, played by Vivien Leigh, has her nanny tighten her corset while she holds onto a pillar. Her waist measures 20 inches, which is unrealistically small, but she is disappointed that her waist has become bigger after pregnancy and giving birth. In the “Pirates of the Caribbean,” Elizabeth Swann, played by Keira Knightley, has her corset so tightly laced that she faints and falls into the sea.

Corsets used to be in fashion, reflecting the feminine beauty demanded by society. Women tightened their corsets to keep their waists small and accentuate their breasts, and just like Elizabeth Swann, many struggled to breathe and sometimes had their rib cages fractured.
People have grown critical of the “modern corset” of the social oppression of women. This corset-free movement is to not be limited by standards of beauty demanded by society. Women go makeup-free, wear glasses rather than contact lenses, wear comfortable underwear and cut their hair short.

In Korea, they call the social pressure on women to wear makeup and dress a certain way “dress-up labor,” and women want to be free from such pressure. On social media, they post photos of crushed cosmetic products and short hair with the hashtag #corsetfree. They say that they are free and new and that, after cutting their hair, they feel liberated and find themselves.

But some don’t identify themselves with this. They say that personal preference and the choice to be slim and pretty should also be respected. Demanding that others join the corset-free movement may as well be the new oppressive corset.

Last weekend, a topless performance by a women’s group made headlines, and the corset-free movement got attention. While I understand the purpose of the nude protest, we need to be wary of the extremist voices unnecessarily inspiring the misogyny and misandry debate.

There are other ways to convey messages and win social consensus than shock therapy. A few months ago, the Fire Feminist Action, which initiated the protest, created a video illustrating how uncomfortable girls’ uniforms are. The uniforms are short and have little elasticity, and many people realized that female students could not lean on their desks or hold the handles on the bus. Just like any movement, we can go far when we go together.