Corporate culture is still a drag

Corporate culture is still a drag 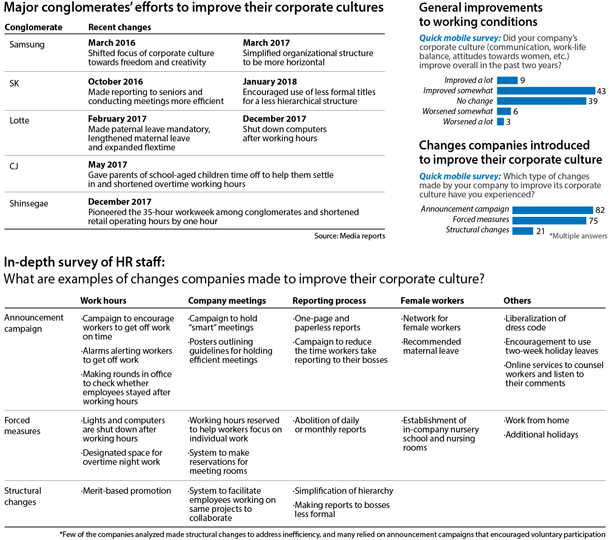 When Kim Hyo-rin, 25, started her first job at a conglomerate, she soon realized that the company wasn’t as progressive as she thought it would be.

“Even though my company practices flextime and has a 40-hour workweek policy, our department boss always looks at us badly if we come to work after 9 a.m., even though I work the full 40 hours,” said Kim.

When she started the job, Kim was optimistic about working at a company with policies that seemed so worker-friendly.

“Our company also has a policy that prevents senior colleagues from texting juniors about work-related issues after working hours and during weekends, but that rule is always ignored,” she added. “Nonetheless, our entire office is covered with posters promoting these campaigns, which I feel are just for show.”

Korean companies have focused on improving their working conditions as younger employees, like Kim, demand a better work-life balance. But these efforts have yet to bear fruit, according to recent research from global consulting firm McKinsey and the Korea Chamber of Commerce and Industry (KCCI), a lobbying group that represents conglomerates.

From last September to February, McKinsey and the KCCI conducted an in-depth survey of 4,899 office workers from eight companies, including start-ups, small and medium-sized businesses and conglomerates. They also conducted a quick mobile survey of 2,000 conglomerate employees at random.

“Even if a company implements a casual dress policy and does away with honorifics to facilitate communication, managers still won’t listen to us. They are just old fogies in jeans,” said a junior manager at a conglomerate, according to a new survey from the Korea Chamber of Commerce and Industry and McKinsey.

Only 21 percent of the respondents said they felt there have been “fundamental structural changes” to their companies, whereas 82 percent of them said their companies relied on campaigns that ended up bringing about no apparent changes. Seventy-five percent felt some measures were forcefully enforced. Respondents were allowed to select multiple answers.

The surveys revealed that four key elements of Korean corporate culture often cited as harmful had improved since 2016, when McKinsey and the KCCI conducted their first survey on Korean culture. Working late, long and frequent meetings, inefficient reporting and poor treatment of female workers all improved at least somewhat.

“While the working culture has improved to some extent, organizational health, which bears a direct relationship with corporate accomplishments, has barely improved or even worsened,” said McKinsey and KCCI in a joint release.

Because corporate campaigns and forced measures failed to make companies deviate from their strict hierarchies, employees didn’t feel motivated or empowered to participate in organizational reform.

Some of the changes that companies have implemented include compensating workers based on performance and enabling workers to apply for positions at departments they prefer.

Companies have carried out campaigns to improve working conditions, including setting off alarms at the end of the workday, encouraging employees to take vacations, setting up forums for workers to complain and hanging up posters to publicize their campaigns.

Employee dissatisfaction with Korean working culture was heightened by the sense that companies lacked direction, especially as new technology and business models threaten to disrupt the way companies do business.

“The world is changing so quickly, and I’m worried whether or not our company has a plan or direction when we can’t even predict the next few months,” said one respondent. “I think it’s now meaningless to plan strategies for the next year, let alone the next three years. I don’t think the managerial-level staff knows what to do either.”

“In the past, we knew what to do and were able to give out guidelines,” said a company CEO. “That is no longer the case. We hope employees will actively submit ideas and try out new ways of working, but no one suggests anything.”

The recent survey was a follow-up to the one conducted two years ago. The previous survey, though, surveyed a total of 40,000 workers at 100 Korean companies. Among the 100 companies, 77 percent of them were found by McKinsey and the KCCI to be below the global average in terms of corporate culture. The survey found that many of the companies had “serious” ills, including chronic nighttime work, inefficient meetings and reporting processes and low gender equality.

According to the 2016 survey, 43 percent of respondents worked late at least three days a week, while 39 percent said their meeting hours were inefficient. Nearly one-third of those surveyed said the process of reporting to seniors was too formal and excessive.

Only 53 percent of respondents in the recent survey said they saw fundamental improvements to their companies’ cultures in the last two years. The rest of the 47 percent felt the situation either didn’t change or worsened.

Samsung and SK introduced changes that simplified their corporate hierarchy. Lotte introduced forced measures, like shutting down company computers after working hours and requiring male workers to go on paternal leave if they have a child. Companies also adopted corporate campaigns to liberalize their dress codes and shorten company meetings.

Even before the National Assembly passed a bill to reduce maximum weekly working hours from 68 to 52 in February, conglomerates cut down their workweeks and introduced flextime. SK Telecom prevented employees from working more than 80 hours every two weeks, while Shinsegae pioneered a 35-hour workweek.

McKinsey and the KCCI concluded that Korean companies should strive to become agile organizations where bosses work alongside their junior-level colleagues, and employees are intrinsically motivated to work well and evaluated according to their performance, not their seniority.

“Companies must become ambidextrous organizations that have dynamic yet stable corporate structures to cope with changes in the managerial environment,” said Park Jae-geun, head of the KCCI’s business environment research division. “They should not only be flexible, but have strong leadership, work efficiently and develop talent effectively, among other things.”